Ape Attack! - A comeback in the form of monkey business! 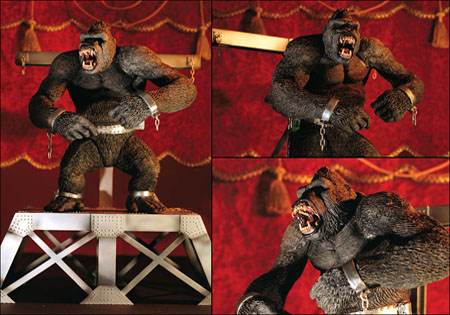 It seems it's been a long while since myself or my action figure reviewing cohorts (them being Yo Go Re and Poe Ghostal) have done some reviews, so I'm leading a revolution with this review of the classic McFarlane Toys figure, and maybe, just maybe, psychically willing the Epinions database to add some of these new fine Ultima Online and Spawn Series 21: "Alternate Realities" figures to the database to be reviewed at our (and your) pleasure. 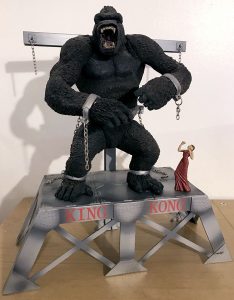 I'm going to take a look at Todd McFarlane's amusing monkey obsession, in the form of one of his finest ape figures - King Kong from Movie Maniacs 3. Cy-Gor 2 from Spawn Series 12 is another great product of Todd's monkey fetish, and Yo Go Re has done a really good Cy-Gor epinion here. Be sure to check that out for more monkey mania!

King Kong is the 1933 movie classic that really started it all. Before big budget monsters, before huge CGI dinosaurs, before it all was the classic starring Fay Wray, about a wealthy millionaire who took a ship to an island 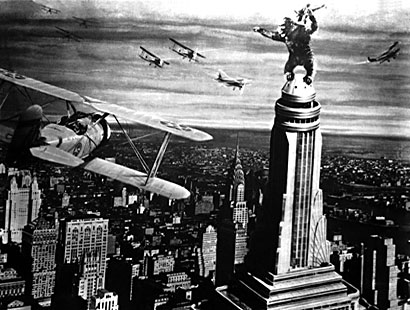 full of monsters, only after one thing - a terrifyingly huge ape. This beloved film holds a precious spot in my movie collection, as it should in yours; for a movie almost 70 years old and in black and white, the special effects are almost as good as they were on its release; some say better. The CGI monsters of today are nothing compared to the authenticity of the huge ape model/puppet/costume of King Kong. Even in black and white, there are thrills to be found, and it's impressive to watch great scenes like the final scene where Kong tries to fight off planes on top of the Empire State Building, or the massive monkey breaking free of his restraints at the enormous theatre where he is ridiculed on display. 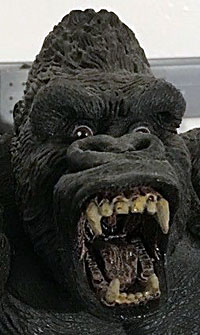 It's of this final scene of which Todd's action figure legend is set.

King Kong is recreated straight from the theatre scene, featuring the simian in his broken chains and cuffs, a huge display base, and a miniature woman (Fay Wray). King Kong is a huge figure; he stands a towering 10" alone, and an even huger 15" on his base. From top to bottom, he is beautifully detailed and sculpted; his limbs look realistically fur-covered, with an excellent body sculpt (can anyone say monkey-nipples?). His hands are clenched in rage, matching the wonderful look on his face, which is dead-on the original Kong. His teeth, eyes, nose, everything is excellent. The restraints are chrome-silver, and look great on the overall package. 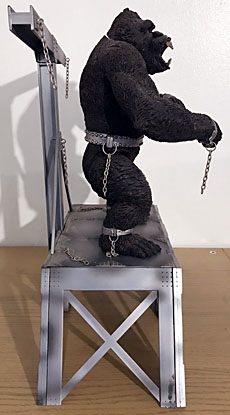 The stand itself makes the figure a total marvel and an excellent display piece. Emblazoned in thick red lettering with "King Kong," it's an exact replica from the film, with lumbering metal supports and real-metal broken chains. Despite being made from thin plastic, the stand supports the weight of this heavy, non-hollow monkey. Where most of the Movie Maniacs figures have a marquee with a movie poster, Kong doesn't need one; this stand identifies and glorifies the monster that is. The woman puts the icing on the cake; wonderfully decorated in a "fainting" pose, she stares up at the enormous Kong in her flowing red dress.

As well as standing on the base, she fits into Kong's hands (for when you're reenacting the infamous last scene!), and strangely enough, into his mouth. MMMmmmm, Fay Wray, anyone? 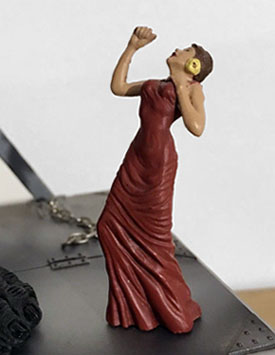 Altogether, Kong on the base with Fay below makes quite a centrepiece. This is the figure to put at the top of your display; he sits on the top of my Movie Maniacs display and towers over everything.

The packaging with King Kong is also very impressive. The front is covered in red curtain graphics, as if opening to reveal Kong upon the stage. The back has a large photo of King Kong and the other figures in the Movie Maniacs 3 series. This makes a great display piece for the MIB collectors, as well as a nice selling piece in a shop window. My only complaint? This guy sets in a new record in twisty ties. For the uninitiated, McFarlane Toys set new records with each toy they create for the number of twisty ties in the package, each wrapped tightly around a different appendage of the figure, holding it in required pose so that the MIB or MOC (Mint in Box, Mint on Card) collectors can admire 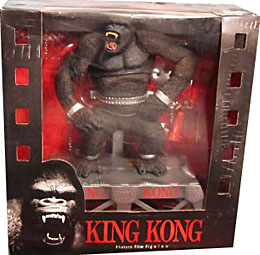 their toy still inside the package. In the meantime, us collectors who open the toys have to saw through a small army of twisty ties to get to the toys. However, King Kong breaks a new record, with approx 25 twisty ties to cut through to get the figure. My suggestion is to use a pair of wire cutters, it makes things a lot easier.

Kong is decently articulated at the shoulders, legs, head, and one elbow articulation. This isn't top of the line, but it's not bad. The best poses involve him looking enraged, which is easy to create; though a few more would be nice - for his size, he could do with ball jointed arms and some wrist articulation, but this would probably subtract from the great sculpt. And he can do one thing that most toys can't - play the violin!!! AWESOME!!!

This is an excellent ape figure, a great replica of the original monster, and a fine display piece. Everything is wonderful - except for minor complaints about the articulation and the durability - and this is a toy for both movie enthusiasts, collectors and kids. As well as this, he's not overly expensive, especially for his enormous size. He's much recommended - and when you're picking him up at the shops, try to grab a copy of the original film, which shouldn't set you back too much, and marvel at the wonder that is King Kong.