Maestro and the Fallen Hero Armor

In today's review of the Marvel Legends Series 12 Maestro figure, I briefly mentioned that he was missing the Fallen Hero Armor that a lot of people were hoping for. Along with the redesign of Ultron, that lack is the cause behind a raging freakout from ToyBiz's Jesse Falcon:

"I thought it was very funny to read that people were pissed that the Maestro had no fallen hero armor witch was NEVER in the comic. That armor was something we created with the first Hulk classic line, but when WE design an Ultron, a character that has looked different every single time it's appeared in the comic it's fu$%&*ing heresy! GREAT!!!!"

You know why people are pissed, Jesse? Because Maestro looked really damn cool with the Fallen Hero Armor, while the redesigned Ultron sucked six ways to Sunday. So fans are still clamoring for something that was never in the comic, something you created with Hulk Transformations over a decade ago, and instead of taking that as a compliment, you throw a little hissy fit? You're damn right we're pissed, because you dropped the ball! 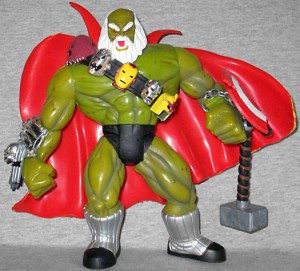 Okay, Jesse didn't really throw a hissy fit (and neither am I right now) - it was intended more as a tongue-in-cheek comment, but that's hard to translate online, so most folks who read the original post at Fwoosh thought he'd gone off the deep end. The basic point is the same: the reason they scrapped the armor was that so many people were upset about the change to Ultron. However, there's a world of difference between a made-up accessory that can be taken off the figure and a head that's permanently attached...

This entry was posted in addendums, commentary, ToyBiz and tagged Hulk. Bookmark the permalink.

3 Responses to Maestro and the Fallen Hero Armor