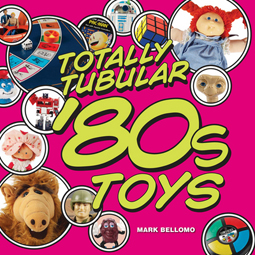 As adult collectors, we have an easy time saying that the toys we have today are far superior to the ones we had as kids. There's just no question. Toymaking technology has advanced to an astounding level, and the sculptors working today have amazing talents. We have action figures that almost move like real human beings and look like perfectly shrunken 3D snapshots of the characters they represent. There has never been a better time to be a toy fan!

In 1983, the FCC eliminated almost all regulation on television advertising, including the ban on so-called "program length commercials," or shows tied directly to a certain product. This opened the door for - most famously - He-Man and the Masters of the Universe to enter our homes and our tiny sugar-fueled hearts. Of course, there were other beneficiaries as well, and so toys became a part of '80s pop culture in a way they never had before. A new book, Totally Tubular '80s Toys, celebrates the decade of excess.

Written by Mark Bellomo, Totally Tubular '80s Toys is a year-by-year retrospective of the decade. Bellomo is known (among the collector community) for his exhaustive tomes on GI Joe (The Ultimate Guide to G.I. Joe 1982-1994) and the Transformers (Transformers: Identification and Price Guide), which break down every single release and every single accessory, with big, clear photos and background on the creation of the toys. Totally Tubular '80s Toys is broader in scope but brings many of those same sensibilities to bear.

The book begins with an introductory overview of the 1980s' cultural high points as well as some personal reminiscences from the author. Each chapter, focusing on a single year, follows a similar pattern: it opens with a one-page recap of the national culture at the time, including politics, television and film, and of course the toys you'll soon be reading about; each chapter then ends with a two-page spread titled "Entertainment-O-Rama," with top ten lists (Television Programs, Films and Billboard Singles) and a brief text piece about one standout moment in pop culture - for instance, 1983's piece is about the M*A*S*H finale.

The main attraction, of course, is the articles about the toys. Nearly 90 toylines are covered in these pages, some getting multi-page coverage. Obviously some lines that spanned multiple years - He-Man, for instance, ran from 1981 to 1988 - but they are only featured in the year they began.* You may have loved the GI Joe figures that came out in 1985, but you'll still have to flip to the 1982 chapter to read about them.

Everything gets at least one full page to itself, even items that don't seem like they'd need the space - for instance, 1985's entry on Pictionary. Personally, I never would have guessed Pictionary came out in '85 - it seems slightly more recent, I suppose?

That brings us to one of the book's most useful points: by carefully tying each toy to the other events that were happening the year it was released, Totally Tubular '80s Toys serves as a bit of a time capsule: the entries are arranged by when the toyline started, not by when it got popular. The Chia Pet seemed to come out of nowhere in the mid-to-late '80s, but, in fact, it had been around since 1982. Jim Henson's Muppet Babies debuted in 1984, but the toys didn't come out until 1985. The organization scheme allows you to act as an amateur anthropologist, watching how trends grew and trying to guess why some things thrived and others failed.

Unless you are a gigantic nerd, you will learn about some new toylines while reading this book. I am a giant nerd, and I still learned about toys I never knew existed! There's also great trivia to be found in the articles, like who the first X-Men character to ever receive a toy was and what connection Garbage Pail Kids have to the Pulitzer Prize.

The book is not flawless. There are some simple mistakes, like incorrectly recapping the plot of Who Framed Roger Rabbit; some strange photo choices, like using a shot of "Listen 'n Fun" Tripwire in the GI Joe section rather than the normal release; and some word choices that may just be a matter of strict adherence to an outdated style guide overriding common sense (for instance, "super-heroes" instead of "superheroes," and "teen-age" instead of "teenage"). But honestly, how many of those "flaws" sound like something that would ruin your enjoyment of the book? Any of them? They shouldn't. They're minor, and the book gets all the major things right.

Bellomo's writing is casual and informative yet still amusing. The jokes are plentiful, but they're also subtle enough that you may miss them on a first read-through - like a Baywatch paragraph discussing how the show about lifeguards was "resuscitated" in syndication. Ba-dum-ching! He sometimes writes about childhood friends or family, but not to the point where you feel this is a glorified autobiography. The focus is always on the toys and the world around them.

The photography is credited to Kris Kandler, and it's all very nice. The toys are lit well, and shot against a white background so they can appear to be floating freely on the page (though I'm not sure what controlled the decision of which images got a drop shadow behind them and which did not). The book was designed by Heidi Bittner-Zastrow, and boy does it scream "'80s!" The bright pink cover with the big green letters and the Pac-Man themed endpapers will hit Gen-Xers as hard as their Boomer parents' acid flashbacks. The interior design is clean and uncluttered, with wide columns and a large font - things that will be helpful as we children of the '80s begin to age gracelessly.

Totally Tubular '80s Toys is not the encyclopedic reference book Bellomo's previous efforts have been, but it's not meant to be; it's an overview, a history of the decade when toys took over the world, leaving an indelible mark on pop culture. It's an entirely different goal, and one it "totally" meets. We leave you with one of the most sublimely ridiculous lines in the entire book:

"The cartoon was created due to the popularity of psychologically troubled Vietnam veteran and former prisoner of war John James Rambo."

*The exception is Barbie - she gets three entries, based on various new themes that were introduced.

This entry was posted in blog exclusive review, books. Bookmark the permalink.