In today's review of the X-Force Warpath and Professor X Minimates, we said that his hoverchair was a reference to another action figure. Here, take a look: 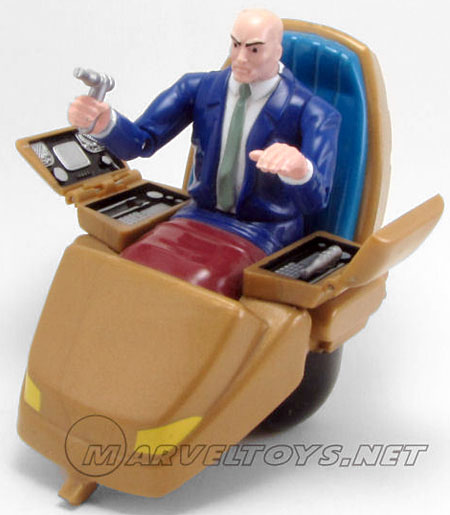 That's ToyBiz's first Professor X toy, from some time in the mid-90s. Though he was eventually available on a blister card, the only way to get Chuck initially was in a 10-figure "Mutant Hall of Fame" pack, where he was literally screwed onto the included display frame.

As you can see in the above picture, the arms of his chair ("Secret Control Panels," the packaging called them) opened, revealing all sorts of technological detailing and two removable guns. The pattern sculpted into the Minimate chair isn't an exact update of the ToyBiz version, but it's clearly an intentional homage. This is far from the first time Art Asylum has done something similar...

This entry was posted in addendums, Art Asylum, ToyBiz and tagged Minimates, X-Men. Bookmark the permalink.