And so we come to the end of our little adventure with the Stunticons. 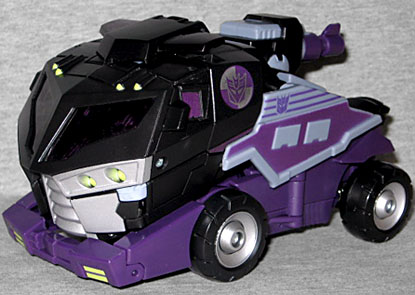 to a whole new level. He annoys the Stunticons (and everyone else) with bombastic proclamations and his habit of referring to himself in the third person. Secretly, he is insecure about his place among the much larger Decepticons. He has reinforced trauma buffers and shock absorbers, making him likely to survive any collision. His greatest weakness is the disloyalty he inspires in those under his command.

Motormaster may have gotten a personality upgrade, but it sounds like the central hub of the character is the same: the fact that 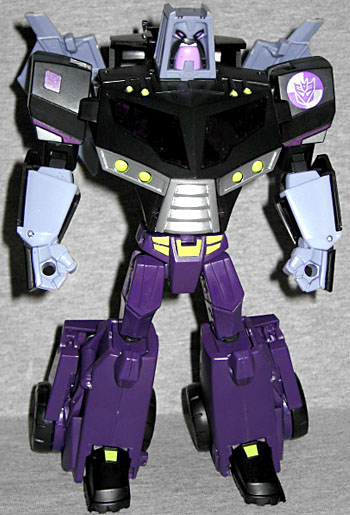 he's a jerk and his entire team hates him. The name "Motormaster" hasn't been available to Hasbro for a while now, which may have something to do with why the comic calls him "The Motor Master," but the box and his filecard Tech Specs parse it as one word, so that wins.

Motormaster is made from the Voyager Class Optimus Prime mold, same as Toxitron. Clearly this mold was chosen so they could use it to make Toxitron as well, but that was secret at the time, so there was quite a debate in the fandom before the final reveal over which body they were going to use (with the other popular choice being Wreck-Gar). The upper body/cab of the truck is black with purple windows, and he has purple legs. The hands ane forearms show some gray, and the various lights on the truck are sort of a neon yellow. The Stunticon variant of the Decepticon logo is on his left shoulder - it's kind of clever how the pattern is similar to the markings on crash test dummies.

(Half of) Motormaster's head was glimpsed in a comic, but it's not the same design seen here. This head fills its "head box" much more fully (though it's more narrow on the toy than it was in Derrick J. Wyatt's control art) and has a big handlebar mustache, which made most people think of Lemmy from Motorhead, but Derrick says he actually sounds like "Macho Man" Randy Savage:

Now, we'd be remiss if we didn't discuss the controversy about Motormaster's 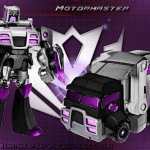 mold. Quite a lot of fans were hoping he'd be a repainted Wreck-Gar, and in the interest of full disclosure, I was one of them. G1 Motormaster had a similar altmode to Optimus Prime, but he wasn't identical - by extension, Animated Motormaster shouldn't be identical either, right? And since in G1 the trailer was a permanent part of the robot, the back end of Wreck-Gar's truck would have been perfect for it. Paint it the right colors, replace the hooks with smoke stacks (or heck, just leave them off altogether), and you'd have a great Animated Motormaster.