Rustin's Spoils of the Week #33

The previously threatened all-Playmobil Spoils shall not be delivered today. In it's stead we have a more standard, diverse selection of Toy-ery for your epicurean palettes! 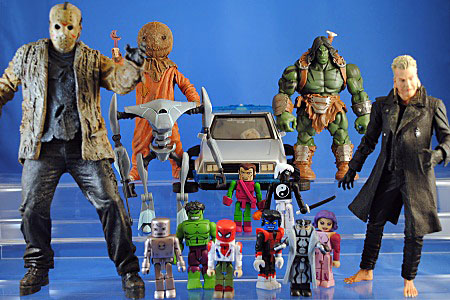 DST - Back to the Future: Minimate Flying Delorean Time Machine 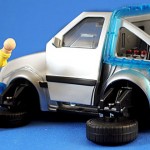 As expected, this set is 85% identical to the BttF 1 car - there is a new Mr. Fusion cap near the vents on the back and new wheel assemblies to allow for the tire-down hover mode. The new mounts use the tires as they were constructed for the previous Delorean, which means not only are there metal pegs holding the tires in place but those pegs have enough slack so all four tires dangle and rattle as you play with the car. The set also includes a Minimate and it's Doc Brown! He's meant to come in his "train shirt" costume from BttF II but instead is just in some pseudo outfit. Clearly what happened here is the budget wouldn't allow for the train graphics, but looking at the prototype they were too complicated and way too big to begin with. Heck, how many people even realized they were a train print until the DVDs came out? DST could have easily gotten away with a simple pattern that alluded to the graphics rather than trying to duplicate them. And what do you do when you realize you can't do them - improvise, don't cut! Oh, the disappointment doesn't end there, sports fans - this also re-uses the original head from the BttF II set, which means the hair is sculpted on. The problem, though, is that it has two holes drilled into the face for the not-included-with-this-figure silver sunglasses from that first figure. Man... talk about just not being able to win. 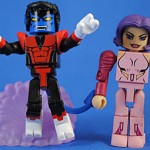 We know Chuck over at DST is a huge Spider-Fan but who is the Betsy Braddock mega-fan!? This is the fourth Minimate we've had of Psylocke, and the second to be in a very little-known costume which was also a Toys Я Us exclusive. From what I can tell, too, this isn't even an accurate representation of her costume (which had bare shoulders and sleeves that billowed at the wrist, not shoulder). So basically you have a little needed, inaccurate, underwhelming figure on one side, and then on the other a Nightcrawler. And this just isn't any Nightcrawler... it's an exact re-reissue of the one from the Excalibur box set, complete with bamf effect stand. I'm all for multiple releases for characters/figures that can be used for several teams, but this is just ridiculous. This is pretty much the worst TRU exclusive pack since the first series! It's just as lazy as could be. At least these could have been Age of Apocalypse versions of these characters if not other, more needed heroes or villains! 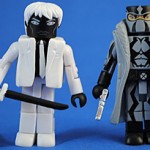 Now this is a great TRU exclusive set! Two all new characters to the Minimate format, actually to toys in general! Fantomex comes in his new X-Force duds, which is great - any additional member to an already established team gets a very warm welcome from me! The paint lines are very crisp and clean with the base coat being solid and even. In addition to the coat torso piece he also comes with two handguns. Negative Man is excellently done! He comes with a coat piece and collar/tie piece to complete the suit look. He also has a black-and-white katana blade and two alternate, black arms. See, you can remove the tie and coat to reveal some musculature on the front and a large Yin-Yang tattoo on his back! The chest apps are perfectly executed - they look good sans coat while being fully hidden by that added on piece while it's worn! Just a great set all around. Makes me miss the days of pairing characters which both had parts for multiple looks. I'd absolutely get a second one to have coatless Negative Man if there was any reason to have a second Fantomex. 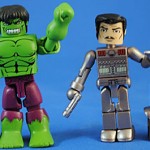 The best Minimate sets are always the ones the re-do figures. Sarcasm. This is the fourth version of the tin can armor they've done, and while it is the best, it's not really needed. This is also the double-umpteenth Hulk Minimate, and likewise by far the best but also, not a hole in the collection. Now, here's some packing theory for you - is putting these two popular characters good because now there's twice the incentive to buy? Is putting two costume/character re-hashes together good because those that have the previous versions can now happily skip purchasing this set? Is it the middle road, better than packing each figure with a new character? Well, DST banked on the former two but I'm going with the third. While great Minimates these aren't really new, so each is "half desirable" so it's essentially like there is only one figure's worth to this set. Now, were the figures split up and packed with new characters as the second billing then everything would be much more exciting. But as is, it's an "eh" set. Especially considering there will be an almost identical Hulk coming up in the Marvel vs. Capcom 3 line. 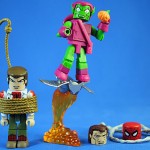 Talk about re-issuing characters that have been done a lot! Unlike the Iron Man & Hulk set, this one does a great job of going that extra mile and really being worth it despite being characters we already have several of. Spidey comes in cover-accurate battle damage civvies with the Spider-Man suit revealed through the rips. Green Goblin comes with the great new glove extenders for the wrist (meaning that rather than the full glove as the hand, the standard hand is still used) and really bright colors for the costume that look great. The only thing lacking here is that the feet aren't pointed booties, but that can be overlooked. Accessories are also richly stocked with a web strand, Spider-Man mask, Hair piece, pumpkin-throwing hand, rope coil, Norman Osborn head and hair, and most importantly, the Goblin Glider with exhaust stand! Everything about this set is great, as long as you don't mind having more of these characters. I must say, though, it's quite a challenge to get the rope to fit in the hand groove - in the process of trying to setup the photos I lost both normal Goblin hands when they launched across the room from the necessary application of force to get the room in there. 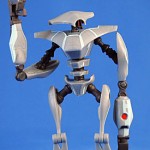 I've been after this guy for a looooong while! A really cool design and tons of articulation! The head fits down into the torso but pops up with a sort of balljoint at the base of the neck, there are balljoints at the shoulders on the torso and hinge joints on the bicep where the rod connects. Swivel and hinge joints at the elbow, swivel mid-torso, balljointed hips, hinged knees and a balljoint at the ankle with a hinge joint at the center of the foot so that it can fold into a bullet shape. The blaster on the right forearm is also removable! This is a really fun TOY but a pretty aggravating display piece. The rumors are true - the knee joints just don't hold too well, so that combined with the articulation and body shape means this guy don't stand too well at all, unfortunately. 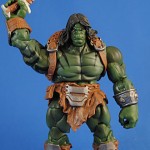 A good sculpt and decent re-use of the smooth "mega body." I don't know, I just don't have much to say about him, oddly enough. A welcome addition to the collection but certainly no game changer or anything. His skin is a fairly dark green which is odd since everything I've seen has always depicted him as pale green in color. I guess they're just aiming for those less-in-the know, or just realizing we'll buy him again when they re-release him down the road... 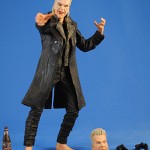 I picked up the original Cult Classics David at Wizard World Chicago this summer and was kicking myself for not having got this one so that I could have both Vampire and Human versions on display - fortunately though this first series of the Toys Я Us exclusive "best of" series was just re-released! This figure is surprisingly just as good in paint and execution as the original, which is quite cool. This format demands the inclusion of fewer accessories but David still comes packin'! He's packaged in vampire form but includes the human head, which is a pretty good likeness for '80s Keifer, both gloved/human hands and the blood bottle from the cave! That's gotta be a record for this series! I understand why they didn't include the boot feet, but it's still very weird to have Human David with vampire feet... this figure comes from the "Dark Period" when NECA was apeing the McFarlane style of highly specific poses with pointless articulation. It's a decent figure from the waist up, with swivel wrists, angled swivel cuts at the elbows and balljointed shoulders and neck. Below the waist we just have swivel cuts at the pant legs and legs sculpted at a very precarious angle. For the most part the figure stands okay, but it's definitely an accident waiting to happen. 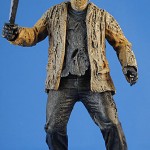 Freddy vs Jason was basically NECA's big affirmation of themselves in the toy world. I think they had gotten one series of Hellraiser out, but this was their first "other"/current license, and the two-pack they released was really a great one. It came with plenty of alternate things, including an alternate hand for Jason holding Freddy's severed and winking head - and now, at long last, I will be able to display it! It's really a testament to NECA that this figure which is about a decade old still totally holds up today! Great in both paint and sculpt, the only bummer is articulation which is both limited and just swivel cuts. He comes with his machete and the mask is removable, too! 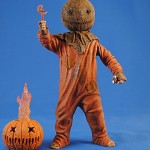 I'd been debating about this figure for a long time but with the re-release of this wave, how could I say "no!?" A very good sculpt, Sam, too, lacks in articulation. Like the others before him, he is also stripped down accessory-wise from his original release but does come with his lollipop, candy bar and iconic (though it's pretty much in only one shot) flaming jack o'lantern (which I really wish had a light in the flame!). I finally watched the movie after getting this figure and between enjoying it so much and the alternate head and additional accessories I must track down the original release now!

5 Responses to Rustin's Spoils of the Week #33