In addition to the Laserbeak included with Soundwave, you can buy two-packs of Mini-Con deployers to fill him up. For instance, this set pairing Ravage and Frenzy.

Ravage rarely speaks, and when he does it is often only to recite some worn piece of Decepticon dogma. In contrast, Decepticon Rumble never shuts up. He issues a constant stream of sarcastic patter designed to provoke enemy and friend alike to violence. They couldn't be more different, but both are totally loyal to their master Soundwave.

Yeah, you heard me, "Frenzy." Despite what Hasbro thinks (this year), Rumble is the red one. At least in my head, because Rumble was the red one in G1, and I don't care

enough about identical robots to bother keeping track of Hasbro's constant vagaries re: their respective coloration. So Frenzy, here, stands 3⅞" tall, though his shoulders come up a bit higher. Other than the head, there are no real parallels between this toy and the old cassetticon - it's hard when you're comparing a rectangular solid to a cylinder. The sculpted details on the robot mode are thus fairly generic, probably so nothing looks wrong when this mold is repainted for the upcoming Autobot deployers. The only thing at all about this figure that pegs it as Frenzy is the color. His only articulation is a swivel at each shoulder: the arms are raised above his head when he changes, so that allows him to put them down. Be careful how far you unfold his feet: if they're too far out, he'll lean forward and fall over; too far back, and they don't provide a stable base for him.

Where G1 Ravage was flat and narrow, this one is flat and wide. 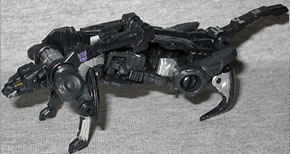 His legs are comically scrawny, looking about half the size they should be for this particular body. The head has the classic cat appearance, and there's a fold-out tail. As an homage to the original toy, there are sculpted circles on his shoulders and hips. No guns, though. The panel that forms his back has lots of tech detailing, and arches upward in the middle. There are joints at the elbows, knees, hips and tail, but they're mostly useless - either too loose to stay in position, or too necessary to keep him upright. 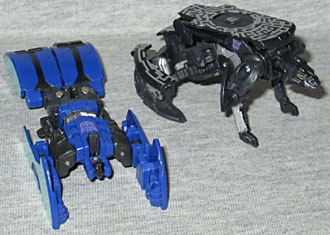 While Laserbeak's auto-transformation dealie works perfectly, the same can't be said for either of these figures. Fremble unfolds all the way (leaving you to position his arms and feet), but ends up lying on the ground every time. Ravage, meanwhile, is just a mess, and doesn't even convert all the way: his front half is fine, but his rear legs only get about halfway out before the actual design of the figure blocks them. Looks like somebody should have spent a little more time in engineering.

Ultimately, both these figures are disappointing. The designs are less than impressive and their central gimmick - converting at the push of a button - doesn't work. Don't bother with this set. Go for Ratbat, maybe; he's a retooling of Laserbeak, so he's likely to be good, but Rumble is boring and Ravage is bad.