When I got a Daryl Dixon from a Walking Dead Mystery Minis Series 2 blind-box, 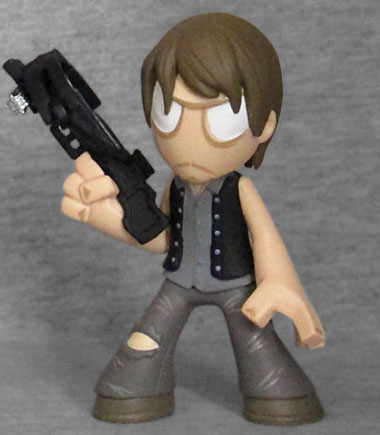 This is the most aggressive, confrontational Daryl yet. Last year's was very guarded, but this one has a wide stance, and is holding his crossbow up, making sure everybody can see it - unless he's trying to shoot a zombified cloud, that's a threat. Actually, the crossbow really demonstrates how the sculpting on this line has evolved over the years - the original was just a black shape, last year's had strings and a silver bolt, and this one adds cams, a riser and a quiver. It still looks cartoony, but the detail is much heavier, just like the figures themselves. 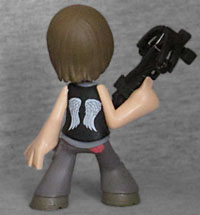 Daryl's Bieber-hair is fully sculpted, and even falls over his eyes (which are also sculpted, unlike the figures in the first two series). His tiny mustache ends up looking like Maggie's lip, but she didn't have a goatee to match - still, he looks like he's frowning. There's a tear in the right knee of his pants, and thin gray wrinkles painted on. Speaking of paint, the wings on his vest are tampographed nicely. They were also on last year's figure (though we forgot to mention them), and while they have the same pattern, they're not identical apps. He's sculpted with a red handkerchief in his back pocket, and a knife sheathed on his left hip.

Daryl is available in a 1:12 ratio, meaning he's theoretically available in every case. There is also a 1:24 bloody variant, and a 1:36 Hot Topic-exclusive version wearing a bandana over his face. Why, in god's name, if you're going to make a store exclusive, would you not put it in every case that store gets? It's ridiculous. 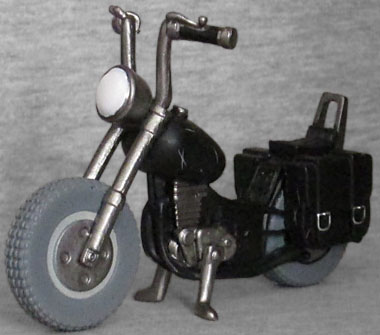 Also available in a 1:24 ratio (and yet paradoxically, much easier for me to find than Daryl himself)? Daryl's bike. Well, okay, originally it belonged to Merle, but you know what we mean. It's a customized 1971 Triumph Bonneville 650 with a peanut tank, and lasted until they had to abandon the prison. It's kind of a terrible choice for a world full of zombies - Daryl specifically eschews firearms because "they make too much noise," but chooses to ride around on something that's about as quiet as a chainsaw tribbing with a vacuum cleaner inside a garbage disposal? 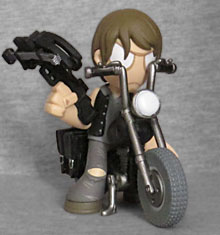 The bike is about 3⅛" long and 2¼" tall. It's sculpted with saddle bags and nice engine details, and the kickstand is down - though really, the wheels are wide enough that it might have stayed up regardless (like Wolverine's motorcycle). The bike is black and silver, with grey wheels. It doesn't have any decals, which is fine: we may not get the skull and crossbones under the seat, but that means we also don't have to worry about the Schutzstaffel SS logo cracker-ass Merle put on there. The bike also explains Daryl's unusually wide-legged pose: the toy can straddle the bike!

This is the first time there's been a Mystery Minis vehicle, and it was a perfect choice. Plus, it adds a ton of value to this year's Daryl.