When I was getting this Mystery Mini, I let a guy at the comicshop pick out which specific box I'd take from the display. So if you don't like this week's Walking Dead Wednesday, blame Phil. 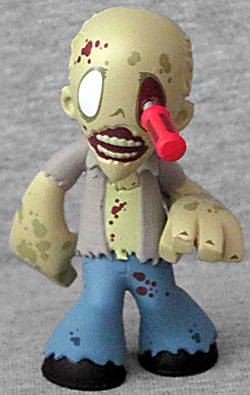 Like Bicycle Girl, this character is one we've reviewed before, but I've got some space to fill, so I'm going to talk about him again. The RV Walker is the one that trapped Andrea in the bathroom, and got a screwdriver to the eye for his trouble. All the Walking Dead Mystery Minis have their big blank eyes painted onto their (generally) smooth, egg-shaped heads, and this one is no exception. It's just that his left eye is "bloody red" instead of white, and there's a three-dimensional screwdriver sticking out of it. The Mystery Minis have no articulation (the idea behind them is that they're more like 3D trading cards than action figures), so he certainly doesn't have the neck-snapping action that McFarlane's did. And the screwdriver isn't removable, either. That's a bit sad, really, because that was a fun feature.

The RV Zombie is posed in a walking/shambling stance, making him fairly dynamic. 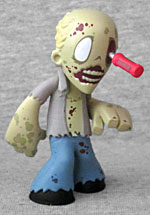 The skin around his mouth is torn away and jagged, and his teeth are parted - he's ready to bite! The edges of his clothing are all raggedy, as well: you get the feeling he's been undead and exposed to the elements for a long time. His shirt isn't painted with the plaid pattern seen on the show (or on the control art for the figures), but there's a subtle checkerboard pattern sculpted into the surface, which is even better! There's a little bit of sculpted hair clinging to his scalp, and his blue jeans have stitches running up the outside of the legs and pockets on the butt. Wow! That's a nearly excessive level of detail for cartoony toys like this. He has a few splotches on his skin and pants, a few random blood splatters, and dark detailing to create his nasal cavity, eye sockets and fingernails.

Even if you don't care about The Walking Dead, a zombie with a screwdriver in his eye is cool enough to be a fun display piece on its own.