Without a doubt the fourth series of Playmobil's Boy-themed Fi?ures series is its strongest. Not only do we get a distinct break from familiar characters seen in other similar lines, virtually every figure here is a great-looking, unique new addition to each one's theme. 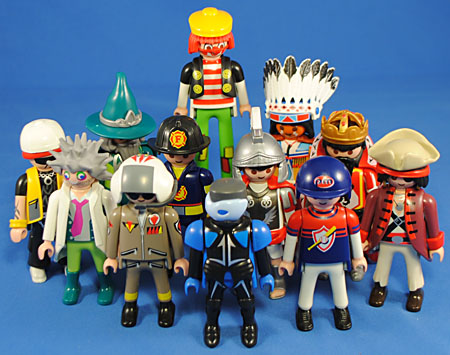 They're packed in a very nice looking dark blue with slightly lighter blue "rays." The dark hue of this series does a great job of differentiating it from both the Girls series' as well as previous Boys ones while, more importantly, providing an excellent back drop to for the new klickies. Indeed, these feel more bright and colorful than previous series' as a result!

As always, we get an excellent insert showing all 12 klickies in the series on one side and a possible element combination on the other. I love these things a lot, but I do feel like the back side is wasted. Maybe they could show multiple combinations of figure parts or even neat photos of the various characters interacting with regular Playmobil sets, sort of like the awesome catalogs from the '80s and '90s. 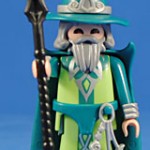 Too cool! A great batch of recolored parts that add up to a cool new figure that is a character missing from my collection - a proper wizard! It's hard not to call this guy "Gandalf the Green" but screw it, I'm not inventive enough to think of a cool G-name for him as of yet. I wasn't too crazy about these elements in their previous colors but the light and dark green hues look very good together and actually have a great affect of working for both "Good" or "Bad," a very welcome bit of "choose your own adventure" which has always been Playmobil's strong suit but has sadly been lacking from many of its figures over the last decade. I love the new, curled beard. 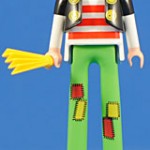 I've never been much into clowns, scary or funny, but the new, long legs on this guy I do find oddly exciting. It's great, classic look for the very traditional aesthetic of Playmobil clowns and, more importantly, no other toy company has done a Clown on stilts, making this guy all the more unique. I particularly like the patchwork on the legs, they're a perfect amount of "business" to break up the green of the pants but not overwhelm the design. He comes with a yellow fan, though I would have expected something more clown-ish like a horn or balloon, and his large shoes are actually clip-ons that fit over his regular Playmo-feet. Despite having no real interest in clowns at all this guy is a perfect use of the format and wonderfully unique release. 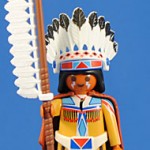 A very fitting addition to the collection timed pretty well to fit with the recent relaunch of of the Western theme! I love it when these hodgepodge lines act as a booster to the fuller ones. Piece-wise there isn't really anything new or unique though I believe this is the first use of the excellent bear-pelt cape on an indian and it adds a great bit of character. The paint is really where this guy shines, especially with his elaborate chest deco. I have several Chiefs already but this guy is a very welcome addition to the family. 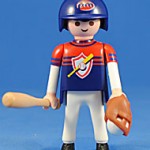 Sports have never really been my thing so I generally have little interest in such releases, but I will say this guy is my favorite one they've done in Fi?ures yet since his uniform actually looks like a legitimate/realistic one a team might actually have. What also helps him succeed is that he comes with a bat and a mitt, so you can pick which part of the inning you're in - nice! He comes with a baseball too, which can fit snugly in the mitt. He also has a "batter's helmet" (is that what they're called?) but sadly no cap. That is the only thing keeping this guy from being perfect since he can't properly play the field in a helmet. 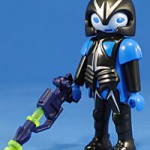 A follow-up to the "Alien Villain" of Series 2 this guy is just as cool as his Series 4 compatriots and even cooler than his predecessor! I think this is the first time the alien head has been done in blue and it looks great! Plus, his "hair" is dark blue this time which really helps with the overall alien-ness of him. Whats more, this is brilliant re-use of parts from the generally lamentable "Dragon" end of the Knights theme, which work remarkably well as space armor. He also gets a big space rifle, which has a translucent barrel permanently molded into the gun - how do they do it!? This is yet another highlight in a virtually flawless line-up, and I'm thinking I need to go get a couple more of this guy to be the soldiers for the Alien from Series 2. 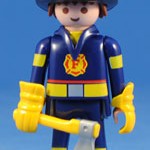 I have never been into Modern-Day or City themes from any toyline so cops, firemen, construction workers, etc. rarely appeal to me, but this guy is definitely an exception to that rule. Despite not having a collection for him to fit into I do like him a a purely visual level. The yellow highlights on the navy blue uniform balance nicely and the metallic dark helmet and black boots continue that trend. I dig his hatchet a lot and the big gloves are pretty fun. I do feel like he's lacking something (a megaphone perhaps?). 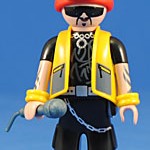 Well I guess it wouldn't be a Fi?ures series if there wasn't at least one figure I didn't like at all, but fortunately Series 4 is batting 11 for 12 in terms of good-to-great figures! Even though I have no interest in this guy even I will concede that he is well done. The colors are plausible he's got plenty of painted deco to add character. He's got a bandana for a hairpiece, which is new, at least to me, and adds a nice bit of color. Ultimately, I just don't know who this figure is for. Is there a huge "thug life" contingent that is honestly an untapped market for Playmobil? Either way, I'd rather have a "bad character done well," like this guy, than the several "good characters done poorly" like we've had in previous series. 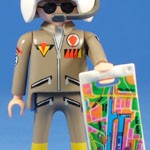 This guy a surprise winner for me. At first this guy wasn't too thrilling, but by gum he won me over once in hand. The jumpsuit is an excellent deco accomplished entirely with paint and a very subtle old-school collar clip (the latter is brilliance - such a simple, tiny detail but it makes all the difference in the world on this figure as he just looks odd without it) giving him a cool "any man" pilot that'll work with any aircraft. The aviator sunglasses, though painted on, are likewise a nice touch. On top of the outfit we also get a surprisingly neat helmet and a pretty phenomenal map. 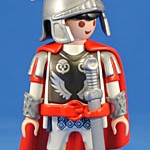 The Roman theme was long anticipated and pretty welcome executed, though it lacked a clear focus and enough civilians, etc., thus meeting a premature end. This guy picks up the baton though and carries it forward nicely. He uses many of the pieces created for that theme and while he looks great I must confess he doesn't leap out as something much different than what's come before. If you missed out on the Romans though, this is pretty much a must-have figure because he does look darn cool and they are executed perfectly within the Playmobil aesthetic! 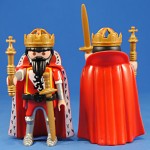 Okay. We're done here. This is perfection. I have quite literally been waiting my whole Playmo-life for exactly this figure. An excruciatingly brilliant use of armored legs and Centurion arms with a tidy beard, golden accessories and cape with fur rim. My god. The only thing better than this would be if he wore the red and white lion logo - OH WAIT! HE DOES!!!! PERFECTION. Total. Utter. Perfection. 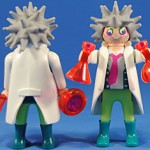 This guy is AWESOME!!!! I'm still not terribly crazy about the hair, but this is an ingenious re-use of it. I dig lab coats, so that mixed with his eccentric but complementary-colored clothes makes for just an incredibly interesting look and character. I absolutely had to get two, not just because he's so cool, but because this guy will definitely become the Rustin Playmo-avatar! While I would have preferred his beaker accessories to be two different colors my only real complaint here is his face. Klickies should always have plain round eyes and while these fit with the nature of the character, they're just so contrary - so extreme. I had assumed that this would be like the previous figures which would have a normal, alternate face on the back of the head, but no such luck - this is the guy's only face! That sure is a bummer, but regardless this is easily my second favorite release from all 8 series' of Fi?ures! 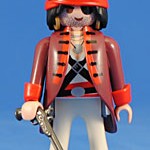 Oh... My... God... a totally unique Pirate that is plausibly historically accurate!? What is this, the '90s!? I'm so, so, so, so, so happy that the design team over at Playmobil is finally getting back to understanding the strength of their product. This is one of my favorite Pirates in the last couple years, heck... decade or more. He takes all familiar elements and through great deco and restrained color choices and looks fantastic as a result. I really dig the dull purple coat with red trim, especially paired with the lite khaki of the hat and pants. This is a simple figure but a fantastic one nonetheless!