Last time we looked at the first half of my "Black Friday" haul courtesy of the incredible markdowns offered by Amazon. This week.... WE CONTINUE AND COMPLETE THAT HAUL!!! 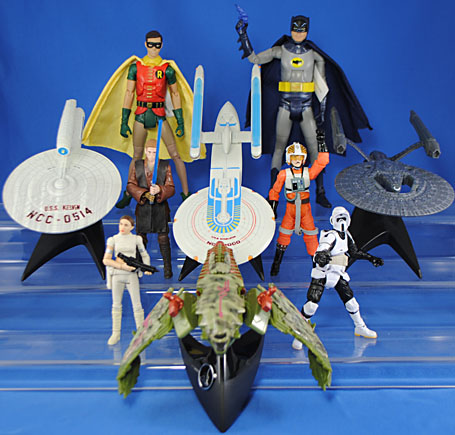 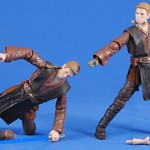 This figure perfectly sums up the problem with where Hasbro is/was right now with 4" Star Wars. This is a great figure, but you'd never notice because it's the umpteenth version of Episode 2 Annie and there is nothing that immediately makes him appear any different from the previous ones. But, at 50% off he's good enough for me, and at 80% off he's good enough for me to buy two - hell, he has two alternate hands after all. And thank goodness I got two since the leg snapped off at the knee right away on of them. Aaaaaah, the sweet delights of online shopping... Sculpt - Good. Paint - Good. Articulation - Good. Accessories - Not Bad. The hands are a little tricky to plug in since the sleeve is so deep though. Ultimately, this is just a very nice basic Ep2 Annie, so I finally have a figure that Wedding Padme can marry. 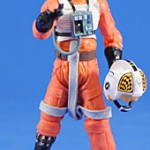 A new, fully articulated Biggs? Sure - I'm in! A new, fully articulated Biggs but with a jumpsuit cast in a peculiarly drab orange that looks incredibly dull next to the other X-Wing Pilots....? Um... thanks for the deep discount, Amazon! The head and the helmet turned out well, and those should be the only unique things to this figure, but as I mention his jumpsuit is almost peach colored. Though it looks only a little muted when he's on his own once he's next to any other pilot Biggs' jumpsuit clearly went through the wash with some bleach. Fail, Hasbro. 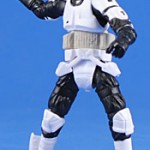 Hey, hey, hey - it's a straight re-release of the Biker Scout from the cool new Speeder Bike set which I unfortunately never picked up. Though I'm a bit bored of "slightly different" Scout Troopers I could go for ball-jointed hips. Weeeeeeeell, modern Hasbro strikes again. There's something like SIX variations of this release and this is last, with the least paint and the visor inexplicably rounded off to a semi-circle. I expected it'd be that version (but who knows - that's the fun of buying in ignorance that online shopping can offer) and that's actually fine because I only paid 2 bucks for him. Yet another wonderful reminder of how Lego, a company that makes one kind of thing, can outsell Hasbro, a company with quite a diverse portfolio that owns, and licenses, countless household-name brands. 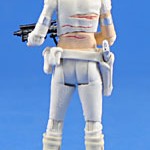 Finally a figure that is actually worthwhile. It's been a long time since we got a Geonosian Arena Padme and it was an update sorely needed. This figure has all of the bells and whistles you'd expect from the line. Ample articulation, good sculpt, good paint, good likeness and decent accessories. My favorite detail, though (clearly) is the inclusion of her ripped-up back. I forgotten that happened until I saw this figure and it's just a cool detail that helps this be more than just "sexy chick in white." Now that I think of it, it would have been pretty cool to see her bareback at some point in Episode 3 with scars from this, but the Prequels are/were allergic to continuity. 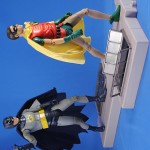 I had only seen this once in stores and it was the first product from line I'd seen, so between the high price and weak paint I passed on it. Once I realized that's what defined this line I've been on the hunt and Amazon delivered in spades by marking this down to $13! Here we get our fourth version of Batman in the line and an exclusive Robin. Considering that these are from Mattel, both have good sculpts and paint (compared to NECA or even Hasbro, though...). Both figures come with bendy wires in their capes for "fun" posing options, though the wires are fairly thick and they end a couple millimeters before the neck, limiting the options. Worst of all they have insanely big tacky tags sewn in. Sure I'm going to cut them the hell off, but still... come on, Mattel, sheesh. Beyond the exclusive Robin (who I have to assume will come in Series 2 with a wireless cape - because come on, Mattel!) the selling point here is a bit of wall for the heroes to "climb up". It's novel, especially with the opening windows, but that functionality seems neutered by the jigsaw pattern of the wall which thusly can't fully hide any figures. Also included is the rarest of all Mattel items - an accessory! They get a batarang with a tiny loop for attaching a string (since the boys are packed holding a thick, black paper "rope"). Between that and the cape-tags this set could have included a "DIY" label. It's easy to pick on Mattel because... hey, they make it so easy. All things considered these are fine figures, but they I certainly don't think they're worth the almost 50 year wait. 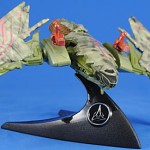 I wasn't crazy about the inclusion of the Klingons in Star Trek into the Darkness (come to think of it, I'm hard pressed to recall anything I did like) and while I'm not crazy about the direction taken for the Klingon ships in the film there's no denying it is a cool looking thing. This does a pretty good job of capturing its appearance. Though it looked gray in the movie and was gray in the Kre-O set they used a muted, drab green here which does a nice job of fusing the look in the film with the look we expect. Most of the body is diecast while the wings are plastic. It is, in fact, the wings that make this a pretty fun toy. They're hinged on the body but attach to the hinges with a swivel joint allowing for a good range of motion. I found that to be a bit gimmicky in the movie but it does make for a pretty fun toy, actually. 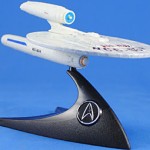 The Kelvin really bothered me when it was first unveiled, and though I'm still not super crazy about it's one-nacelle design, it's uniqueness and awesome crew and fate have all caused it to grow on me. Plus, I really, really dig the flat saucer (as they taper on most ships). The top and rim of the saucer are diecast while the rest is plastic. The paint is pretty good too and it, like the rest of the ships here, comes with a base similar to the ones from the previous releases but are now cast as a single piece in black plastic, so hopefully they balls won't break off when the ships are removed now. Now that I have this I am super bummed that I missed the wildly rare Narada (plus the NX-01 and TOS 1701). 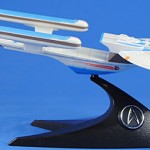 Here we "Prime Universe" fans get a little bone tossed to us with the third most famous Original Crew Movie ship. The once-villain-now-friend ship is executed quite well in this format with plenty of metal parts (the saucer and body tops). I've never liked the look of the Excelsior much and I'm not sure if that's intentional. At any rate, it's long squatness is captured well and it has nice, clean paint details. 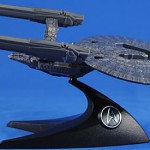 This ship... for every conceivable reason I should hate this ship, but you know what... I kinda really dig it. In a weird sort of "Expanded Universe" way it's pretty cool. The odd proportions, the armored hull, the saucer section cut-outs... it's a great bizarro-Enterprise. The nacelles and body here are plastic but the full saucer is diecast. There is a thick coat of gray paint which lessens many/any sculptural details on the saucer but then there is some well done black printing on most of the ship to add a sense of texture and detail. Plus, it's totally in scale with the Hot Wheels Enterprise, if you're ever able to actually find one of those. This was the ship I was most looking forward to in the series and it certainly delivers. My only complaint (other than that is belongs in a comicbook not on a movie screen) is that the deflector dish is unpainted - a dash of color would look great here.

This entry was posted in Hasbro, Mattel, Rustin's Spoils of the Week and tagged Batman, Star Trek, Star Wars. Bookmark the permalink.