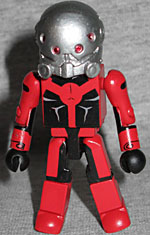 to shrink to a tiny size and a special helmet to control an army of insects. Under financial pressure, electronics expert Scott Lang stole one of Pym's suits but he has since proved himself as a hero and as an Avenger.

When he first appeared, Scott Lang just wore Hank's old costume; this stylish update appeared in the late '90s, when the Avengers came back from the pocket dimension where they'd been trapped for a year. It's still red and black, but does away with the blue. Plus, the colors are somewhat reversed: instead of a black symbol on a red chest, it's the other way 'round. His helmet is more insectoid, covering his entire face, but with four red, robotic eyes peering out from the front.

You can remove the helmet, if you want, so that you can see Scott's face. Unlike Hank Pym, Scott Lang is a redhead - or at least he was. It may change now that Paul Rudd is playing him in the movie. Unless Rudd dyes his hair red, which would just be weird. The hair either sits up high on the head, or comes down too far in the front. 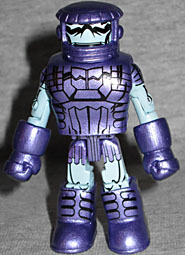 Led by the Supreme Intelligence, the Kree are a colonial and warlike race, and have clashed with other races for millennia. Their numerous military outposts around the galaxy are protected by powerful robots known as Sentries, which have battled the Avengers on many occasions.

Kree Sentries are planted on various planets and often forgotten until something randomly wakes them up to cause havoc. They're giant - like, Sentinel size - so you'll have to pretend he's bigger than he is. A waist extender and a powerhouse chest can only do so much, you know? He's metallic purple with pale blue limbs, and is wearing a big ridiculous helmet. No surprise he was created by Jack Kirby.

While most of the figures in Series 44 could be had in the two Disney Store-exclusive Avengers box sets, Ant-Man II and the Kree Sentry were not. The set includes a single-footpeg swoop stand, either so the Sentry can fly or Ant-Man can jump. Take your pick.