As is often the case with me, much the 2013's later releases from MattyCollector just ended up in a "to open" pile which I was just never that compelled to get to. Sure there's some neat stuff in here but just nothing that had me especially excited to tear into these. It's ultimately this sense of malaise that led me to not subscribe to MoTUC for 2014. I'm kind of kicking myself for it, but I also don't have junk like Geldor that even though he was in the "to open" pile I wasn't compelled to open. At any rate, enough bellyaching from yours truly - let's get to the toys. 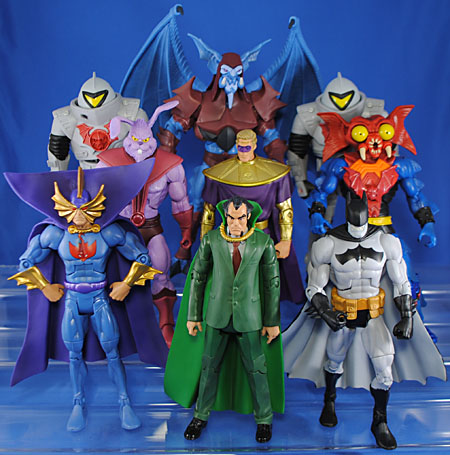 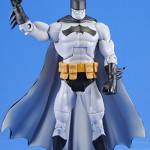 This toy is offensive as hell. Yes, he turned out good, but that they made him? Over anything else!? Almost quite literally, ANY other character would be better than this. It's not the fans that killed the line, it's Matty. I subbed for 2014 but how can I expect anyone else to when we get junk like this. Batzarro doesn't fill any hole in the collection because he was in NO WAY missing from the collection. 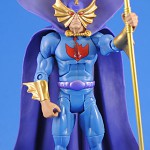 Yet another character I'm only aware of thanks to other toys that came before him. I'm nuts for Aquaman so I guess this is nice in that regard, but again... just such a ridiculous costume I can't help but think of what we don't have instead of this guy. At least he's a new/unique character that has some relevance to the history of the comic. Paint is good and sculpting is unremarkable. The cape is so huge that it both further heightens the silliness of the character and makes him difficult to display since it takes up so much room. He does come with an accessory, so that makes him better than many Matty non-MotUC releases. 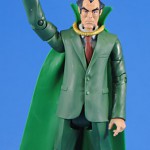 Finally a character worth having! Plus, he's in the Batman: the Animated Series costume (which might have been a classic comic outfit too?). Like Ocean Master he too has a big cape that is a little tough to work with in terms of posing. It doesn't help, of course, that he uses the old Clark Kent body with the annoyingly forward tilted neck. Add in Mattel's refusal to do good neck articulation and you get a Ra's that can basically never look up or even forward, only down or slightly down. The face is also in that weird OMAC & Guy Gardner style of being very undetailed and flat. If ever there was a DC character that needed a detailed, atmospheric, character-fueled face it was Ra's so this is ultimately a lackluster release for me since he essentially looks like "just a guy." He comes with a scimitar as well which is a great inclusion, but looks a little silly in his hands. 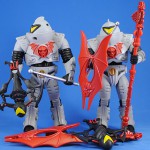 Well, this is better than the Snake Men but not as cool as the Palace Guards. They certainly are neat looking robots but the final execution... they definitely fall more on "animated style" end of the spectrum. I suppose that's fine since I understand they're only from the cartoons, but it's a bit frustrating because the more "Classics-ized" versions of such characters turn out pretty good. I was also very surprised by how limited their range of motion is. Sure they're bulky designs but I figured they'd be able to just make more robust joints with that. They do come with a bunch of accessories though, which is great. Except... yep, I'm going to complain some more, it's like there's too many accessories. Just much too much to know what to do with. I would have been more than happy to forgo the ubiquitous crossbows for alternate helmets. Ultimately, for me, this is just another average MotUC and another fine reminder than the line really isn't for me and hence why I have pretty much dropped it. 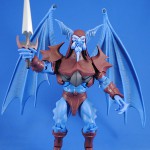 Aha, that's how they were able to do Draego-Man! I knew those wings would have to be used again, and used again they were! This figure is actually a great example because all you need to do is compare the fairly detailed wings to the largely undetailed figure to see the stylistic discrepancy. Still though, the design is cool enough that I was happy to roll with it, but I have to say that once in hand there is something about his proportions that really bugs me. I think it's his long, narrow neck and head versus the thick bulk of the body plus the new legs. The feet have redonkulously big metal knife-toes which inhibit posing, surprisingly much, due to lack of a rocker joint. He comes with a nice sword, too. Though I'm a bit disappointed in the final figure I'm pleased to have him. I think he'll balance out Carnivus very well in both style and color. Plus, in terms of new tooling and sheer mass it seems like there are few better "deals" in the line. 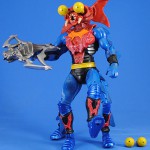 Yay! The last character to be released I have any sort of connection to (since they ostensibly charged $300 for Two-Bad [and until they make a Gwildor I won't have access to]) and he turned out AWESOME!!! The figure is almost, if not, entirely new tooling and just looks beautiful. Great, knocked-out-of-the-park sculpting from the Four Horseman in beautiful, rich shades of red and blue - this is truly MotUC at its finest. The four legs are fully articulated and offer much more dynamic posing options that I imagined. He also comes with interchangeable eyes and a removable mouth. I don't quite get the latter feature as it interferes with the eyes pretty minimally and easily could have been sculpted to avoid them. He gets interchangeable eyes which seem to be better in theory than in practice. He also gets the obligatory Horde crossbrow which is just big and excessive, and honestly I think he looks way cooler holding Ra's Al Ghul's scimitar anyway. All in all, I'd say this is a fault-less figure for the line and for Matty, so if you can get your hands on him - do! 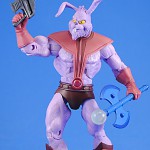 This was a big WTF for me, and first just seemed another hokey character I'd never heard of but with the slight novelty of being a pink battle rabbit. I was a little surprised fans seemed so upset about this figure. What makes this figure work is the heavy detailing in terms of his fur. Sure it's just a simple re-use of the Beast-Man body but it works perfectly and is EXACTLY what's missing from Lord Dactus and the Horde Troopers above - it elevates the figure above the source material by slightly and successfully re=imagining it rather than staying beholden to the source material. He comes with a little blaster and a neat axe (presumably cast in translucent plastic and painted over to allow the jewel atop it). There is something about the blaster and his semi-cocky expression that gives the figure a somewhat Han Solo feel, which is oddly cool. I'm not sure where he fits in my collection (I know he's Filmation but I think he's better than the rest of that subset) but I'm pleased to have him. 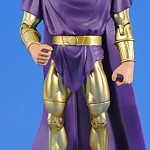 Not with a bang with a whimper. Ozy is my least favorite design from the book and it's always been hard for me to take him seriously in such a silly get-up. The figure captures the look well enough though with the sundress cast in articulation-limiting thick plastic and two interchangeable heads for masked and unmasked looks. I am actually sort of surprised (though I shouldn't be) that he doesn't come with Bubastis, and that really, really kills the figure and hurts the line. And I'm not even talking about a great Bubastis, just a simple PVC pack-in (like Cringer) in a simple seated pose. I suppose we should be thankful to have figures from Watchmen after all the years, but like most Mattel product recently I find myself thinking "would I rather have nothing than this" and leaning towards the former. But I've never been that huge of a Watchmen fan so it's not like the hole was really burning in my collection.

This entry was posted in DC, Mattel, Rustin's Spoils of the Week and tagged Batman, DCUC, MotU, Watchmen. Bookmark the permalink.