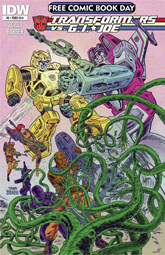 The book is drawn by Tom Scioli, best known for the Kirby-knockoff Gødland, a comic that, statistically, no one you know has ever read. He's also co-writer here, paired with John Barber, a guy who's written and edited a bunch of IDW's Transfomers comics - and those seem pretty popular, so that bodes well for this book. 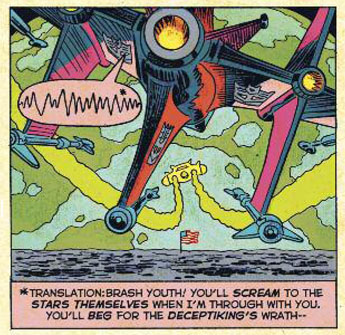 This new title isn't tied to any of IDW's existing continuities. It's its own world, not beholden to any stories that have come before. But while this is an origin, it's an origin of the conflict between these two groups, not an origin of the groups themselves: as far as the Transformers go, it's almost an epilogue; and we join the Joes in media res, attacking a Cobra base (in the ancient temple of Koh-Buru-Lah, just one of the many pieces of fanwink that populate the brief story). In fact, since this is just an opening introduction, the two factions barely even notice each other - 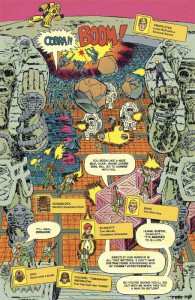 it's more that their separate stories intersect, then go their own ways once more.

However, if you're expecting writing on par with the main GI Joe and Transformers comics, you're going to be disappointed - it's like a slightly less funny Mad Magazine parody. Reading it with that in mind, it's really pretty entertaining, but you might want to manage your expectations before you crack the cover open, or you're in for some culture shock while you try to re-adjust. Think about it in terms of [adult swim]'s Superjail: it isn't meant to be good, it's meant to be silly, and when it's silly, it's good. 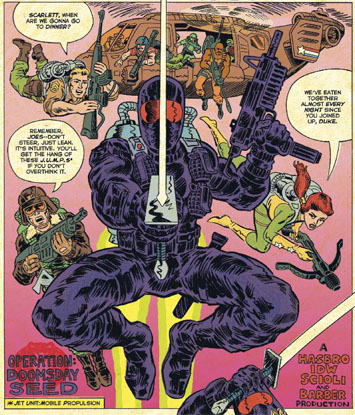 The same goes for the art. I've never understood the fetishization of Jack Kirby's artwork. You know how the success of Rob Liefeld inspired a slew of less talented imitators? Imagine if it hadn't happened until after he was dead, but then people built entire careers out of aping his style. The "real imitation krab" nature of the art adds to the Mad parody feeling.

However, there are a lot of clever moments, too. We get layouts and diagrams that could be taken straight from the '80s books, and a ton is owed to the cartoons, as well. If you don't try to take things seriously, there's a lot to like here.

The back of the book features a page-by-page commentary, where Scioli and Barber discuss the process of hammering this story into shape, and tease where they want things to go in the ongoing series.

On my first read of Transformers vs. GI Joe #0, I was disappointed, because I didn't understand what they were going for. Every subsequent re-reading has improved my opinion of the book though, and it's definitely worth picking it up for free on Saturday.