You may remember from last year's Walking Dead Wednesdays that I was hoping to get the Teddy Bear Walker rather than Bicycle Girl. Dreams do come true! 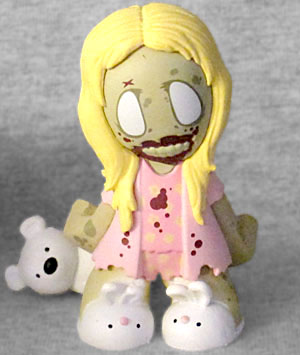 The first zombie we see on the show is this little girl, wandering around near an abandoned gas station, which actually served a few good purposes: Walking Dead was a majorly hyped, highly anticipated premiere, and was sure to draw in all kinds of viewers; by putting such a harsh scene right at the beginning, it allowed them to weed out the people who wouldn't want to watch their show; secondly, it showed those of us familiar with the comics that AMC wasn't going to be afraid to break from what was on the printed page; and finally, it showed that the zombies weren't going to be generic monsters, they were going to play on our emotions and elicit our sympathy. Bold! 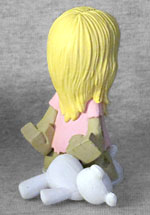 Teddy Bear Walker is just a kid, so naturally she's slightly shorter than most of the figures - 2⅜". While the actress on the show just had a wound on half of her mouth, the Mystery Minis' visual shorthand for "zombie" is to have the lips be entirely gone. That's acceptable. She's wearing her pink polka dotted pajamas and her dressing gown, as well as her cute little bunny slippers. There's a bit of blood splattered on her clothes, and dark splotches on her greenish skin. And of course, she's dragging behind her the white stuffed animal that gives her her name.

If the Teddy Bear Walker had been the first Walking Dead Mystery Mini I got, I probably would have stopped collecting them right then. So it's good for Funko and bad for my wallet that she wasn't.