Marv knew the frame was in when he woke up next to Goldie's body. Why had she chosen him that night? Who killed her? And why? Accused of murder and on the run, Marv followed the trail that led to her death, running afoul of a psycho named Kevin, a cardinal named Roark, and an angry woman named Wendy, who sure looked a heck of a lot like Goldie. Whoever was responsible, Marv was gonna find 'em, and give 'em the hard goodbye.

You've got to admire the restraint that Art Asylum showed by 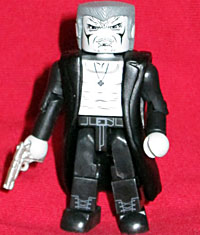 holding Marv back until the second box set - we've said before that he's Sin City's Wolverine, so most companies would have made sure to put him on the market right away. But instead, they started with the graphically interesting Yellow Bastard and waited to give us Marv until round two.

It's a nicely made figure, too. He has new flat top hair with a widow's peak in the front, and his face is painted with a ton of tiny lines to make him look rough - even with the lack of a nose, the toy still looks like Mickey Rourke's makeup. He's armed with his pistol, Gladys, and his coat is a new piece that has oversized armholes instead of slits all the way down the sides.

If you care to remove the coat, the set includes a second pair of arms 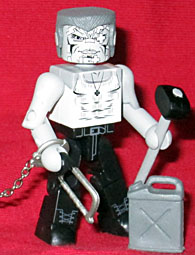 for him - these are bare, and have small bandages painted on them. Since a plain face wouldn't go well with those arms, he's also got a second head, this one all bandaged up the way you'd expect: a bunch scattered all over his face, one on the bridge of his nose, and two holding his left eye closed. Because Marv's a f&@%ing psychopath, he's also got a small smile on his lips. His white tank top has been tampographed with many small wrinkles, and his cross hangs (painted) against his chest.

The set also includes a bunch of random accessories that all obviously belong to Marv, rather than anyone else in the set: a sledgehammer, a hacksaw, a can of gasoline, and a pair of handcuffs. Out of all of them, the cuffs are the only ones that have been seen before. It's rare to get this many new pieces at once!

After the first box set gave us three grayscale figures and one in color, I hoped that would be a trend - but that would have required this one to give us Goldie instead of her sister Wendy. Maybe they can offer an exclusive two-pack at some point? Goldie and... 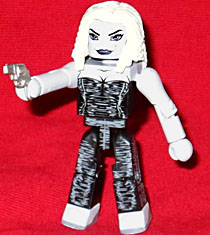 bloody Marv, maybe? I wouldn't be surprised to see that happen.

It'd be easy to do, too. They could use the same paint masks, just with new colors. Wendy's tight outfit is painted on, done as grey wrinkles against a black backdrop, so it would just be a question of painting her skin pink, and maybe giving her a red jacket. She could even come with the same snub-nosed pistol. Her face looks adequately like Jamie King, with a bit of a wicked smile and blonde hair. Yes, despite the fact that this is a black and white figure, her hair still has a slight slight slight yellow tint to it. It may be an optical illusion, but it's definitely not the same tone as any other gray in the set, and if you compare it to the "white" of Marv's shirt, you can immediately tell they're different. Well played, AA!

In the comics, Kevin was a slightly pudgy middle-aged guy with a bit 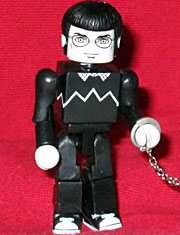 of stubble. In the movie, he was played by twink dreamboat Elijah Wood - and he's had three previous Minimates, thanks to his role as Frodo. This Minimate has a terrific likeness, at least on one of the heads. Yes, he has three of them. The one he's got on in the package shows full Elijah face, but since his most common appearance in the film included blank white lenses in his glasses, he gets a head like that, too. Since you can't see his eyes, the likeness isn't as good (even though the paint is otherwise identical). His third head keeps the white glasses, but shrouds the entire face in shadow, for maximum creepiness. He's wearing his Charlie Brown sweater, and the collar of his plaid shirt pokes out. His feet are painted with his sneakers, and his hands have small white triangles that represent his claws!

A quick note: I got a rather amusing error in this set. The "white glasses" face was tampographed upside down on the head, so the neck hole is above his eyes and the hair hole is below his chin. That's not a mistake I've ever seen on a Minimate before. Back to the review!

If you wanted to, you could count the handcuffs from before as an accessory for Kevin just as easily as you could count them as an accessory for Marv. And honestly, the same goes for Kevin's alternate hair piece, which has a weird Ed Grimley spike on top - it's actually a handle, allowing Marv to carry around Kevin's severed head. What a cool extra! 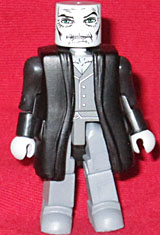 Or maybe you'd like to give the severed head to our final figure, Cardinal Roark. This figure, featuring the sun-dried likeness of Rutger Hauer. He's not wearing his vestments, since Marv went to visit him at night: rather, he's wearing a robe over his pajamas, and has slippers on his feet. The color of his arms doesn't quite match the color of his robe, but they're both darker than his PJs, so it all works out just fine. His face has almost as many wrinkles as Wendy's pants, but he also gets this set's sole spot of color: the green of his eyes.

This set makes me remember how very good the first Sin City movie was, and makes me glad that DST picked up the license for it. I might have swapped Wendy out for Marv's parole officer, Lucille (because Carla Gugino), and made a Wendy & Goldie two-pack to complement this set, but this is still a nice four-pack.

I just need to get a replacement Frodo head.