Armed with the astonishing ability to shrink in scale but increase in strength, master thief Scott Lang must embrace his inner hero and help his mentor, Dr. Henry Pym, protect the secret behind his spectacular Ant-Man suit from a new generation of towering threats, including the villain Yellowjacket. With the help of Hank's daughter Hope Van Dyne, Pym and Lang must plan and pull off a heist that will save the world. 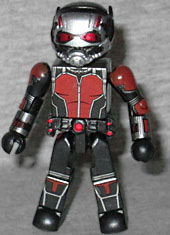 As far as Minimates go, Ant-Man hits the sweet spot: the helmet and belt are sculpted elements (new ones, because nobody else has ones that match the movie designs), but all the rest of the details are simply painted on. Complicated, complicated paint apps. It would have been easy to create a chest cap with sculpted tubes, big clunky wristbands, and complex boots, but that would have made the figure really busy. This way, he looks great. And unlike the Marvel Legend, his helmet is right! It covers his mouth, and it has tubes on the back of the neck. No kidding, I am seriously digging this little guy.

Since the helmet is a fully sculpted piece, you can probably guess that it's removable. And since the helmet is removable, you might also guess that there's a painted face beneath. You'd be right! The face doesn't look too strongly like Paul Rudd; his head-shape doesn't meld well with the Minimate cylinder. Even adding the included hair only helps a little.

Hey, speaking of hair, here's Hope Van Dyne! Okay, that sounds like a weird transition, but bear with me here. You watch Agents of SHIELD, right? Of course you do, it's great. This season introduced Rosalind Price, head of the Advanced Threat Containment Unit, and for some reason, they decided to style her hair exactly like Hope Van Dyne's. Exactly like it. So the point is, this figure could either be Evangeline Lilly attending a meeting at Pym Technologies, or it could be Constance Zimmer on her way to capture some Inhumans. Variety! Clearly in the context of this set she's Hope, but the stylization of Minimates provide more options than expected. 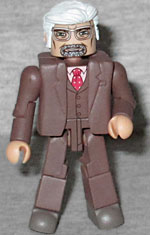 One of the coolest things about Ant-Man was that it gave us a glimpse of the interim of the Marvel Universe. We've seen the far past (in Captain America and Agent Carter) and the present (Iron Man and everything after), but Ant-Man showed us a little bit of what happened in between. That's why it's cool that Hank Pym belongs to a different generation of heroes, rather than being a contemporary of the Avengers. Between the glasses and the goatee, this has a decent Michael Douglas likeness. He's very squinty. He's also wearing a brown three-piece suit that makes him look more stately than adventurous.

The set includes two extra arms that, at a glance, appear to be bare skin. But nobody in this set would have bare arms, and the color doesn't match any of the skin we can already see, so what's up? Well, taking a cue from what DST's Zach Oat said when we questioned Darcy's arms, we looked at the collars. Hank Pym is wearing a pink shirt - those are his sleeves! And sure enough, during the movie, he takes off his jacket and we see the sleeves of his pink shirt peeking out from around his vest. There was no reason these needed to be included, but the fact that they are is pretty cool. 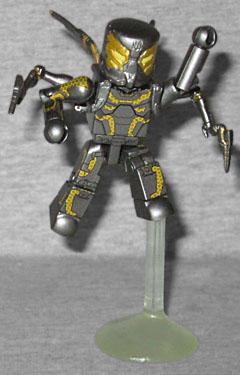 As cool as the movie's Yellowjacket looked, it's surprising that the only toy he's gotten is this. While "Ant-Man" gets his name from his size (and from the insects he talks to), Yellowjacket actually looks insectoid. There are hints of the traditional YJ costume here, such as the wings sticking up off his shoulders, but it's mostly a new creation. The gunmetal grey of the suit is broken up by yellow honeycomb sections, and like Ant-Man, most of the details are created by paint, rather than plastic - only his wings and plasma cannons are 3D.

Well, them and the removable helmet - take that off, and you'll see a stubble-y Ephraim Goodweather from The Strain. The set includes a flight stand, and since Yellowjacket is the only person in this box who can fly, it's probably for him.

I somehow missed this set when it was solicited - I didn't know it was coming until it showed up on the NCRL. But that's the advantage of these four-packs: you can go into your local comicshop and order one even after it's come out, and they'll have it for you in just a week or so (by comparison, stores have to order three sets of the standard series - there are four two-packs in each series, but 12 packs in a case). The only thing we'd change about this one would be to include the penny and bottlecap bases from the SDCC set, or maybe the "Micro-Mates." But then I guess the SDCC set wouldn't feel as special, would it?