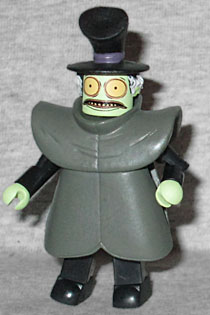 I had no idea this guy was supposed to be Mr. Hyde! He's easy to remember from the movie - he keeps smaller duplicates of himself under his hat - but I just assumed he was some generic ghoul.

I guess he does look slightly Victorian - there's the hat, of course, but also his weird overcoat, with its large flap draped over the shoulders. It doesn't seem like there will be a lot of potential re-use with this piece, but Art Asylum has surprised us before. The coat is a dark greenish-grey, while the rest of the body is black. You'd think the arms should match it, but they certainly appear to be black in shots from the film. He's got pale green skin and big yellow Steve Buscemi eyes. It's a little bit disappointing that he doesn't get his two tiny doppelgangers, but how would they have done them?

Normally I only get to add to my werewolf collection in the fall, 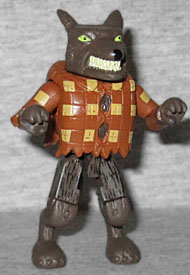 but this is obviously a special case! This figure (who's called "Werewolf" on the back of the packaging, but "Wolfman" on the front) is a Toys Я Us exclusive, but wasn't at my local store - he required a special trip! (No way was I passing this one up.)

We get a lot of new pieces here: the head isn't quite as pointy as it was in the film, but that's just the Minimate style - the intention is clear. His chest is new, with sculpted lines for his plaid shirt, and his tail is molded as part of it. Like many Minimates before him, he has tiny claws on his hands, but he also gets new lower legs that are animalistic and have sculpted lines for fur. That makes us miss the Battle Beasts. And unlike the Easter Bunny, Wolfie's feet still work with the included figure stand.

I never saw NBX Series 1 anywhere, so I was prepared to pass on this line the way I have on TMNT and Predator. But when Series 2 showed up at TRU, all three sets were worth getting, so now I'm considering back-tracking for the rest.