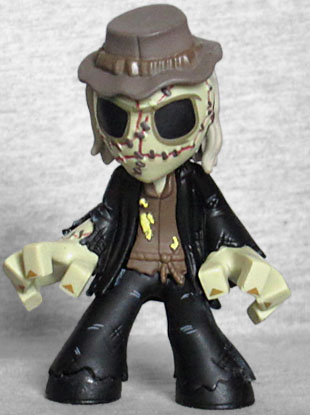 foundational pillars of Tumblr. But I never had cause to get into it, so it just continues to exist in the periphery of my awareness, like an ice cream truck idling a few blocks away from your house: you know it's there because of the incessant drone and people's reaction to it, but you really just want to know when it will drive away and leave everyone in peace. But on the other hand, I'm all about fun toys.

Funko made a series of Supernatural Mystery Minis, full of the two generically handsome stars, their angel boyfriend, and various demons and monsters. One of said monsters was the Scarecrow, from the episode cleverly titled "Scarecrow." In that episode, the monster of the week was a scarecrow. But not Batman's Scarecrow, a different scarecrow. The episode in question was basically a melange of Children of the Corn and American Gods (I'd call it a "pastiche," but that implies intention and awareness, something done on purpose to make a point), with people in an Indiana town being sacrificed to appease a Norse deity. One that look the form of a scarecrow.

On the episode, the Scarecrow looked like a stuntman wearing the cheapest scarecrow costume Spirit Halloween Store had in stock. The Mystery Mini is free to exaggerate things, making the Scarecrow thinner and ganglier. His clothes are sculpted with crosshatching to make them look threadbare, and there are also thin gray lines painted on the pants to age them up some more. His shirt is tattered, with some straw poking out, and he wears a floppy hat. Though this is one of the series that just paints the eyes a solid color, the Scarecrow's are black instead of the usual white. His face is covered with thick stitches, and another on his right wrist. In the show, the Scarecrow carried a small hand sickle, but the figure has nothing.

You don't have to care about Supernatural to like this figure. Scarecrows make great Halloween decorations, and there's nothing about this one that precludes it from just being a random seasonal item.