Be sure to vote for Walking Dead Wednesday - because if you don't, who knows what kind of unqualified replacement you might get instead? 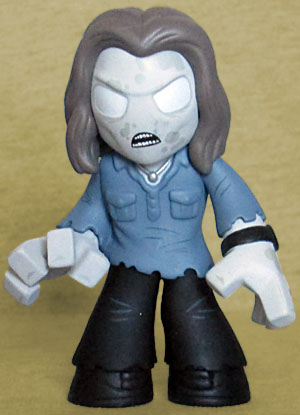 Deanna Monroe, the leader of the survivors in Alexandria, is the second-most famous person to have been met by Rick Grimes. Not the actress (Tovah Feldshuh has been in other things you may have seen, but she's still not as recognizable as Pruitt Taylor Vince or Ethan Embry or John Carroll Lynch or Aldis Hodge - or even Michael Rooker), the character: though Team Grimey meets her in Virginia, she was a Congresswoman from Ohio. When the outbreak happened, she and her family left Washington DC to head back to her home district, but were redirected by the Army to the Alexandria safe zone. But she's still only the second-most famous, because Tyreese played in the NFL, and more people will recognize an ex-linebacker than a minor midwestern politician. America!! 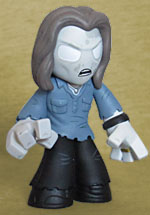 of starting a Crazy Ex-Girlfriend custom diorama), but here she is in the "In Memorium" series. Yet again we see that the series' desaturated colors work really well for the zombies, because none of them are very colorful to begin with. When these figures were announced, I didn't recognize who this was supposed to be - in part because it's not sculpted with any appreciable chest, so I was running through male characters, trying to figure out who died. But if you look at images of Deanna post-resurrection, this is clearly her: the untucked, tattered shirt, the necklace, even her watch and wedding ring are the same. And the colors are close enough that you could drop her into a normal collection if you wanted.