Well, the Christmas season has kicked in which means slightly better distribution of figures, some new stuff showing up and the perennial fun of seasonal "stocking stuffer" type stuff! 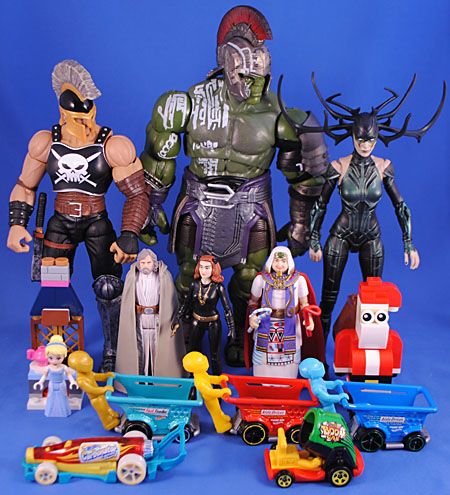 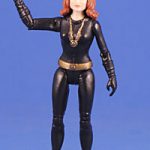 Toys R Us had these marked down to $7.99 so I finally pulled the trigger on the villains they had to go with the Batman & Robin with Batmobile. Like the rest of the 9POA line this is a pretty good figure with hinged knees, elbows, T-Crotch and a balljointed head. She comes with a tiny cat-gun which she holds pretty securely, though it seems likely to be lost due to its tiny size. One of the things I REALLY appreciate about this series from Funko is that it favors B villains rather than A listers which seem a bit over merchandised. Catwoman is the one exception to the B list roster on this first series though, which is a bummer as she seems less appealing, so I wish they'd gone with Eartha Kitt instead, at least. But now that they have the tooling it'd be easy enough to do up new heads to get out all three Catwoman actresses! 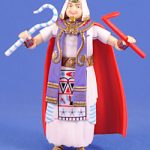 King Tut!?!? One of the many very bizarre but highly memorable villains from the show, in this case thanks to Victor Buono's gleefully BIG performance, (and of course our latent fascination with ancient Egypt). He's another fine sculpt though the face seems a little too caricatured to me. The paint is pretty good, though this costume is awfully white - I would have preferred one of the more colorful outfits he wore, I think. And while he does have the standard, and titular, 9POA his leg and knee joints are pretty restricted by his skirt, so it can be a bit tough to get him standing. He comes with two accessories - the hook and crop standard to ancient Pharoahs. Overall, a decent figure but awesome in his "second tier"ness and lack of merchandise in all the other lines! 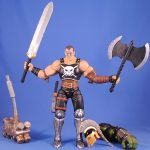 I never found all the figures to assemble the Ares build-a-figure back during those "in-between" years from Hasbro, so I was looking forward to getting this upgrade... except it's not an upgrade, it's the same damn figure as the build-a-figure! Which REALLY shows off how good the current figures are and how mediocre the old figures were. For example - the neck is just a swivel joint and is permanently facing down. Cool. I guess this is good for anyone who desperately wanted that old figure, but I was really expecting one using the new tooling and body type/s. Oh well. At least I can finish my RagnaHulk now. 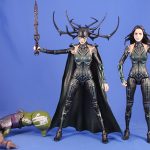 Daaaaaaaaaaaamn, this figure is great! Nice sculpt, tons of articulation, an evil sword, removable cape and two heads!!! One head is the gorgeous, epic crown with all the prongs (which are separate tooling and removable, which makes removing her from the tray and future storage much easier) and an unmasked head with a genuinely stunning likeness of Cate Blanchet! I couldn't find this figure for ages and then finally found two, so both heads get displayed! Ragnarok was quite and entertaining film and I enjoyed Cate/Hela so I'm very pleased that the figure turned out so amazing and that she has both looks from the movie! I do wish she was packed a bit heavier since most folks seem to be doing the same as me and doubling up on here. 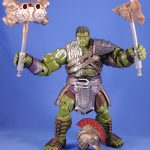 He's a really nice figure and loaded with accessories! He's got the big engine looking hammer, a space axe and a removable helmet, plus his bandolier/pauldron is removable too! Weirdly and annoyingly his white war paint skips the parts of his skin covered by the straps, I mean I "get it" but without those straps perfectly aligned it looks weird. Sadly he doesn't have the shaved sides of his head like in the film, but I'd love it if they do a second series with a "casual/in his room" Hulk and a couple more figures from the movie (Kirby Armor!), but of course that'll never happen. Still though, this is one of, if not THE best movie Hulk Hasbro has made yet. 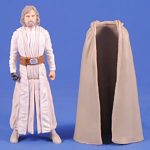 The toys for The Last Jedi remain terribly bland and boring, but this Luke is necessary for my Force Awakens collection, plus it's finally an Old Luke figure!!! The sculpt is fantastic and fits the current 5-Points-of-Articulation aesthetic quite well. In lieu of an accessory he comes with a removable cloak. I can't state enough how much I love this costume for him! His RotJ outfit plus long Kenobi robes all in off-white... now THAT is MY Luke!!! 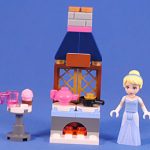 Found this little polybag in Target's Christmas section. It's a nice little build that's kind of a diorama for this servant-y Princess. The minidoll is the main draw here because, well, Disney. She's a nice figure with good printing and is seemingly the same as the ones from actual sets, just much cheaper to get. I hope that they put out more Princesses in Polbags like! 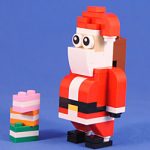 Also in Target's seasonal section is this pretty fun little Santa polybag. There's a good amount of bricks and it's actually a fun build. His sack is a separate build that clips on to his back and he comes with some little presents. I like this much more than the bevy of Christmas trees they normally do. My only complaint is that the ankles are just a single stud each so it's pretty easily to break his legs and topple Ol' Saint Nick. 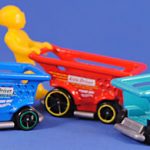 This yet another of my beloved minifig compatible Hot Wheels cars, except this one comes with a plastic figure that can clip on! The rim of the shopping cart is the same gauge as standard construction set minifigs (Lego, Mega Don't-Call-Us-Bloks-Its-Construx-Now) hands so they can grip all around. On the bottom interior are two studs that seem like they'd be for a minifig to stand on, but they're too close to the wheel wells to a fit a figures foot (at least for Lego), so that's cool... The Blue Cart with Light Blue driver was the first version I found, then the Red Cart with Yellow Driver and now the Teal with Gold driver has just started showing up. 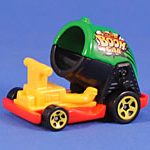 This groovy little car first showed up last fall in Red, White and Blue and then in the summer in Yellow and Green, but now this cool, colorful version is popping up and it's my favorite variation yet! The car is designed for minifigs which can grasp the handlebars at the front then lay down in the hollow, backless cannon to cruise about and wow spectators! A nice through back to the Dare Devils of yesteryear and just pure goofy fun! 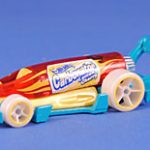 And here is a new color version of the car that's also a bottle of soda that's also a bottle opener! The bottle-opening spoiler works well enough but in the past it has resulted in some minor paint damage. Still though, such a fun concept! This version features a nice set of primary colors with sky blue frame, translucent red bottle/body and soft yellow highlights. I particularly like that the logo on the bottle is the car's name, like a brand, and even more that it's "Lemon Cherry" flavor!

3 Responses to Rustin's Spoils of the Week #198