This gritty new reboot of "Cotton-Eyed Joe" is weird!

When Mad Max: Fury Road came out, people immediately began pleading with NECA to make toys of it. Over and over and over. Every time, Randy patiently explained that they couldn't, because Fury Road wasn't being licensed for toys. And then people would ask again. We toy fans, as a whole, 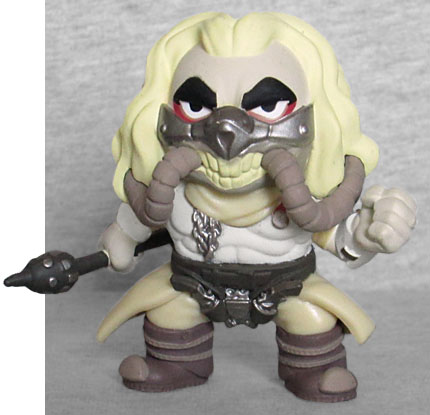 are nothing if not slow learners. Anyway, Funko eventually managed to get George Miller to open up the rights, so while we may still not have any action figures, we do have our first toys - both POP!s and Mystery Minis.

Immortan Joe was played by Hugh Keays-Byrne, who also played the villain "Toecutter" in the original Mad Max. There was a bit of fanon going around that Fury Road was an interquel, with Toecutter surving the original and becoming Joe, and then Rictus Erectus surviving FR and becoming Road Warrior's Lord Humungus. Then DC published some Fury Road comics that were based on George Miller's character notes, revealing that Joe was, in the words of production designer Colin Gibson, "the last fascist, feudal moron [...] the last white man on Earth, and partly the reason for why we were screwed."

A white man he definitely is. The toy's skin is a pale, pale gray, 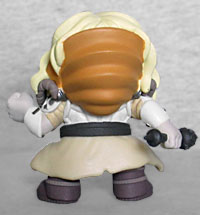 representing the powder he cakes himself in to salve the pain of his rotting skin. The plexiglass armor he wears on his chest and arms, molded to make him look more muscular than he is, is pure white, the toy's effort to set it apart and suggest the clear shininess of the movie. His stringy hair falls over his shoulders, and his eyes - this is one of the Mystery Minis lines that gets fully sculpted and painted eyes - sit beneath giant black eyebrows. Of course, he absolutely has to have his breathing mask (based on horse teeth) and the big orange bellows on his back that pumps fresh air into his lungs.

All the Mad Max: Fury Road Mystery Minis are available in a 1:12 ratio, meaning there's one of everyone in a case. Surprisingly, there don't seem to be any store exclusives this time around, so there's no variant that shows Joe unmasked.