In the words of Run DMC, "A girl named Carol follows Daryll every gig we play/ Then D dissed her and dismissed her, now she's jockin' Jay." So, uh, spoilers for next season, I guess? If some guy named Jay shows up. 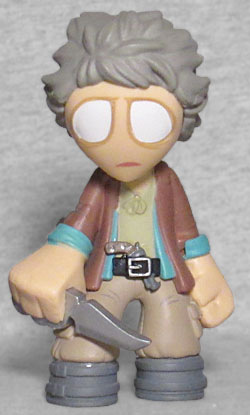 Carol Peletier is a vastly, vastly different character on the Walking Dead TV show than she was in the comics. They started from similar places - very meek, withdrawn women who were totally dependent on their husband - but went in completely different directions. In the books, the stress of living in a post-apocalyptic world got to her, and she just couldn't handle it; on the show, she already had ties to the Atlanta survivors by the time her husband died, so she could use them for emotional support, allowing her to find her own strength and thrive, to find the better version of herself. Now she's one of the most popular characters on the show (though they really need to give us a break with the whole "Carol leaves the group/Carol returns to the group" revolving door already - sorry that she's overshadowing your fave, but just let her hang out and be all-around awesome).

Carol was part of Series 3, which means the Mini is based on Season 4. 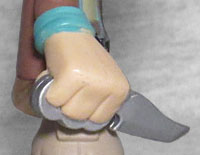 Specifically, it seems to be based on "Indifference," one of the "Carol leaves the group" episodes: while the boots, pants, and tan blouse were pretty much standard, the color of the shirt she wore over it (and beneath her brown jacket) changed. Here it's blue, which says "Indifference" to us! Despite the only facial features being some lines beneath the eyes and a tiny little frown, the likeness of Margo Martindale Melissa McCarthy Melissa McBride is surprisingly recognizable. She's carrying a pistol tucked into her belt, and is armed with her knife - Funko even remembered to put the metal rings around her fingers.

Carol was available in a 1:24 ratio. Since the release of Series 3 predated people sharing the case layouts online, pulling her was just a matter of luck.