It looks like we won't be getting a new series of Walking Dead Myserty Minis this year. Good, that gives us the chance to catch up. 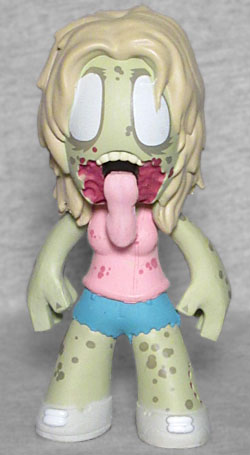 This figure comes from the distant past of Series 2. Since that was the first series where humans who had appeared in the comics were allowed, there were only five zombies in the assortment - and since two of those Mike and Terry, it doesn't leave a lot of slots for anyone else.

She's based on a walker that appeared in the show's fourth episode, "Vatos." In the episode, Rick takes Daryl back to the rooftop where he'd left Merle handcuffed. Spoiler: he wasn't there any more. While tracking him down through the building (amidst fighting about a dumb potato basket), they happened upon this undead lady in one of the offices they went through.

She was only ever seen from the waist up and the part of the office she was in didn't have any windows, so a lot of what we've got here is extrapolation. And even then, it's easy to tell

from what little we can see what's wrong. Like, the toy's top is pink, and it clearly wasn't in the show - it was blue or grey or something. Both those colors do appear on the toy, as her shorts and her sneakers, respectively. And seriously: cut-offs? What kind of office was this? There's a big circle of tooth-marks on her left leg, suggesting that's where she was bitten... except her whole deal is that she's an homage to Day of the Dead's Dr. Tongue, with her lower jaw ripped away and said organ lolling about. The flesh around her mouth is raggedly torn, and her upper teeth are exposed. She has greenish skin speckled with darker spots.

The Tongue Walker was available in a 1:12 ratio (or 2:24, as teh boxes inexplicably insisted on identifying it) and has no chase variants - in the regular cases. There was a glow-in-the-dark version available at Hot Topic.