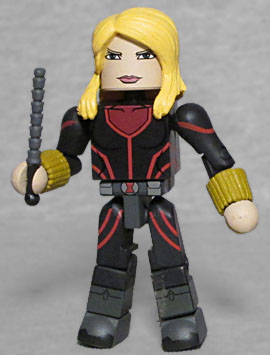 Yelena Belova is Hydra's answer to the Black Widow. Trained in their Red Room program, she is a deadly agent with formidable martial arts and weapons skills.

Hey, that's cool, this is the first-ever Yelena Belova Minimate, and she's got her own codename and origin, rather than just being "Black Widow II." Her costume is similar to Black Widow's, but with red accent lines bending out from the waist. She's got a grey belt and boots, but the hip block is entirely grey, rather than black. She wears Widow bracelets and uses the baton weapon Black Widow has in the MCU. The hair is blonde, of course, because that's the main thing that's always set Yelena apart from Natasha. 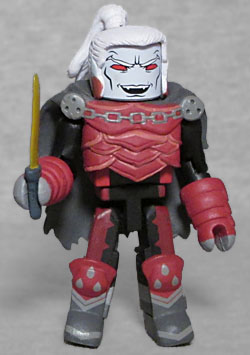 Dracula is the father of all the vampires on Earth, and commands their legions. He seeks to possess an artifact that will make it possible to walk in the daylight.

Well this isn't a mold we ever expected to see again! The Avengers Assemble Dracula is based on the weird armored version, meaning he gets to reuse the pieces from the "Curse of the Mutants" box set. His skin is pale blue-gray, and he's wearing different boots now, but the important parts are here. The stuff about him wanting an artifact comes from the Ultimate Spider-Man cartoon, not Avengers Assemble, so his only accessory is a golden sword. Unfortunately, his hands are open too wide to hold it.