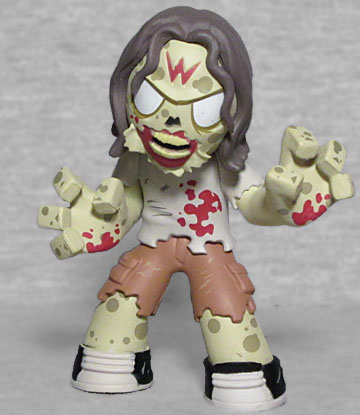 Before appearing proper in Season 6, The Wolves were teased quite a bit throughout Season 5. From the graffiti spraypainted in the backgrounds to the walkers with a W carved on their foreheads, no one's spent this much time setting up a bad wolf since Doctor Who! There were a lot of theories about what all the hints meant (with the cream of the crop when it comes to stupidity being "it's an upside down M for Morgan"), but in the end they didn't prove to be too much of a threat in a stand-up fight - like real wolves, they were more about guerilla tactics and numerical superiority.

This figure is easily identified by the big red W right below his hairline. It's sculpted into the figure, not just painted, which is accurate to the show: the living 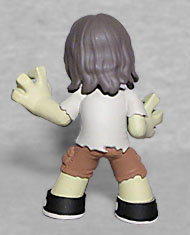 members of the Wolves may have had some W's that were simply paint or blood or mud or what have you, but the victims they turned into zombies got "Aldo Rained" first. A lot of their zombies had their arms and legs cut off, too, but this one still has his appendages, which makes him hard to identify - maybe he's one of the ones who came out of the trap in the season finale? The skin around his mouth is torn away, which we take to be part of the actual design and not just a signifier of death like in the first series. He's also got no nose. None of them do, really, but he's got even less. There's a black hole there, where a nose used to be. He's wearing a T-shirt and shorts, and Converse shoes apparently, and he's covered with blood and other splotches.

The Wolves Walker is available in every box, found on the top, in the middle left spot.