Somebody needs to work on their naming skills, because 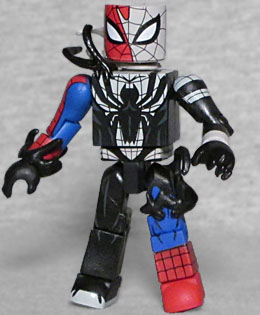 we just got a "Symbiote Spider-Man," and now here one is again. That'd be confusing enough (from an archival standpoint) on its own, but to have both figures on shelves at the same time? It's weird! The designs are nothing alike, however: this is sort of like a Negative Zone version of Spidey's suit, trading red for white and blue for black, but with a chest symbol that's more Ben Reilly than Peter Parker. This figure shows the symbiote taking over Spider-Man, so there are still flashes of his regular costume visible on the head, right arm, and left leg, and some sculpted pieces show us tendrils of costume wrigling about. If you want something more complete, the set includes alternate bodyparts to get rid of the red and leave him completely possessed. 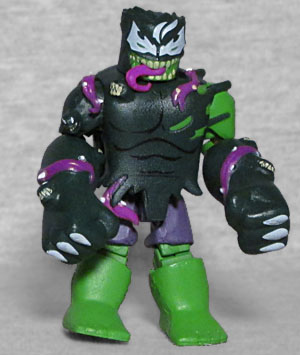 gave fans something they never knew they wanted - a Venomized Hulk - and apparently "Maximum Venom" will be doing the same thing. Lots of new pieces on this figure! Really, the only standard add-ons we get are the feet and thighs; even the head is new, sculpted with hair and teeth and a long tongue. His forearms and hands are some of the largest we've ever seen on a Minimate, and he appears to have teeth on his knuckles. Hulk is so large that the Venom symbiote can't actually cover his entire body at once, leaving large green patches with thin strands of black stretched over them. Baby Venom faces poke out all over the surface, similar to the Madness design, and spiky maroon tentacles may be intended as extra tongues with teeth sprouting from them.

Season 2 of Marvel's Spider-Man hasn't even ended yet, so we're still a while away from Season 3 debuting. If "Maximum Venom" is going to be as all-encompassing as it seems, Walgreens should have plenty of cool designs to Minimatize.