In 2019 (what was known as "the before times"), it seemed like a real great idea to pack 135,000 people shoulder-to-shoulder in a poorly ventilated building where you could barely move and had to shout directly at each other's faces in order to be heard. Today, the very notion of that should give you the heebie-jeebies. The cancellation of the 2020 con season does have one advantage: it allows us to finish the reviews of last year's Transformers BotBots "Con Crew" exclusive set. We're already done with the Meet n' Greets and the Line League, so today let's wrap up Fantastic Fuelers.

If there's one thing you absolutely, unquestionably need when 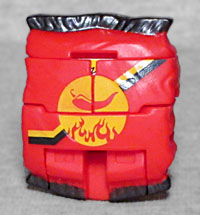 you're attending a convention, it's... a backpack. But one of the things you should always make sure you've got in your backpack? Snacks! You're going to get hungry while waiting in line, and you never want to give up your space. So throw in some granola bars, or in this case, a bag of chips. Hot chips, judging by the red pepper on the front. Did you know peppers change names when they're dried? Like, straight off the vine, a fresh jalapeño is just a jalapeño; dry and smoke it, and now it's a chipotle. Isn't that neat? This bag's logo shows a pepper above flames, so either it's fire-roasted flavor, or it's very, very hot. The bag itself is red, with yellow and black stripes running past the logo, and the edges are black.

BotBots are simple to convert. Rip open this bag of chips by spreading the panels from the front, rotating the legs down, then pull the arms out of the sides and turn them down.

In a special session with Hal A. Peno, he'll reveal hot tips for staying fueled up. Arrive early for ideal seating, the first three rows will be pelted with 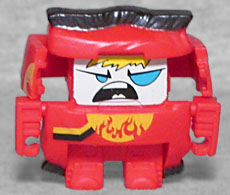 the soggy chip crumbs spewing from his always-full mouth as he talks.

Wow, that's even grosser in 2020 than it was in 2019. Hal is short and wide, with a belligerent look on his white face. The blue eyes are wildly different sizes, and his mouth is open in a shout. The fact that he appears to have a little bit of blonde hair falling onto his forehead is unexpected. We still get the chips' logo on the robot's chest. The way the panels end up sitting behind and beside the head make him look even broader than he otherwise would. He's a little chonky boi! 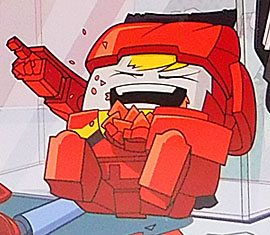 This mold is shared with the Series 3 figure Treat Elite (a blue bag of pretzels), who was only available blind-packed and was released fairly soon after this set. It also showed up in Series 4 as Miss Mixed, a bag of trail snacks.