In the second wing of the Transformers BotBots mall, members of the Backpack Bunch can mostly be found by the office supply store on the ground floor. Just like they were in Series 1. Don't be afraid to change things up, Backpack Bunch!

In Afrikaans, the word for a stapler is called a "paper vampire" 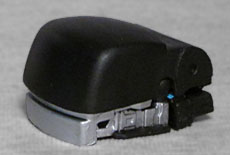 (papier vampier), which may be the raddest thing ever. And then you find out the part that pushes the staples out is called the hammer, and the base is called the anvil. Who knew office supplies could be so brutal! A black stapler looks much more realistic than one in bright blue, but you have to ask: why haven't they done one in "Office Space red" yet? Is it because they already used the name Milton? Was that name originally grabbed for a red stapler, but then reassigned for some reason?

BotBots convert very easily. All you have to do here is unfold the legs, and swing the arms down and to the sides. Basically, the robot is just curled up in a ball with its hands over its face - very relatable. 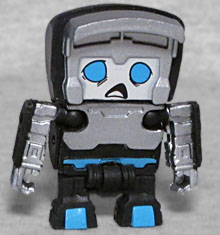 staple use. Just when you think there's nothing more to say about stapling, he'll tell a joke. What do you call a staple with commitment issues? A paperclip.

Steve has a pretty pedestrian name for a Transformer, doesn't he? Despite his bio describing him as super bland, his expression is wild: huge blue eyes and a mouth that's wide open like he's screaming. Is this a Yu-Gi-Oh Abridged reference? His body design is cooler than the Series 1 figure too, with a silver "vest," blue across the waist, and on the top of the feet. The use of the same basic colors between the two figures makes them look like a nice pair, and makes breaking my "only one of a mold" rule easier. 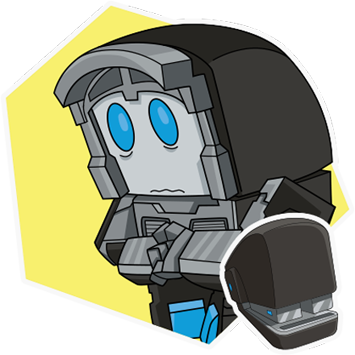 Steve from Accounting is available in Backpack Bunch and Music Mob 5-packs, or a Swag Stylers 8-pack.