Today's review says Tokka was based on a snapping turtle, but that's only part of the story.

When it came time to develop characters for the Teenage Mutant Ninja Turtles toyline, Playmates turned not only to their own in-house designers, but to Eastman & Laird as well; Eastman & Laird, for their part, also extended the opportunity to people they'd worked with at Mirage Comics, which is how, in April of 1990, renowned horror comic artist Steve Bissette ended up pitching Terror-Pin the Terrible. 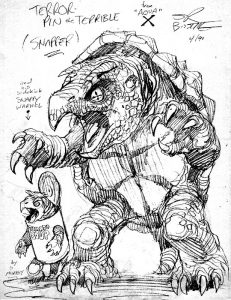 (His little sidekick, Snappy Warhol, was created by Stephen Murphy, the mind behind the TMNT Adventures comic, but drawn here by Bissette.)

The design was rejected, possibly because that's about the same time Ryan Brown was pitching Slash, and it's not like the team was looking for two different snapping turtle toys. At least, not until the movie producers needed some rights-clear villains for their sequel, and used Terror-Pin as inspiration for Tokka. 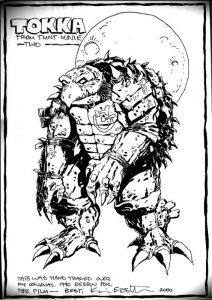 That's Eastman's take on the design, which is much closer to what we saw on-screen. But Mirage has never made any secret of the fact that Bissette deserves the credit, not only listing him publicly as Tokka's creator on some products (at Ryan Brown's urging), but also fully buying out his share in the character to make sure there were no ownership questions in the future. So the guy who drew Swamp Thing during Alan Moore's famous and groundbreaking run is also ultimately responsible for the toy we reviewed today.

And as a fun addendum to this addendum: a month after submitting Terrorpin, Bissette recycled the (at-the-time seemingly rejected) idea as "Lockjaw the Loggerhead," the creature in a low-budget monster movie: 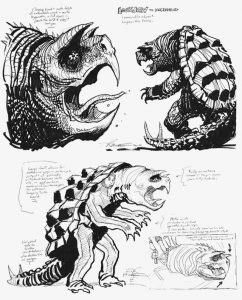 He was put in touch with those filmmakers by, again, Ryan Brown, who clearly is a guy that will look out for his fellow artists. While the "giant killer snapping turtle" movie was never made, you can still appreciate the thought put into the monster's design. Like Stephen Bissette himself has said, "Clearly, I was intent upon somebody, somewhere recognizing the overlooked monster potential in 'casting' a snapping turtle hybrid in some sort of villainous role!" Mission accomplished!

This entry was posted in addendums and tagged TMNT. Bookmark the permalink.