Do not preorder the Battletoads toys 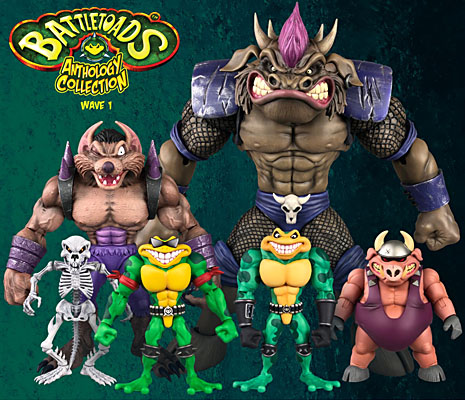 We've gotten emails from a few fans asking if we thought they were worth getting. And honestly, we can't speak to that, because so far Premium DNA Toys has yet to actually release any of the products they've solicited.

See, "Premium DNA" is simply a rebranding of Megalopolis Toys, the group doing the Madballs and Barnyard Commandos updates - theoretically. Nobody's gotten anything from them yet, so these Battletoads would be the equivalent of Super7 selling Series 3 of their TMNT Ultimates before releasing anything else at all ever.

But more than that, someone named Grayson Leigh has put together a comprehensive article about the financial troubles/shady business dealings of Toy Overlord/Megalopolis/Premium DNA/whatever name they choose next. In short, it reads a lot like a "robbing Peter to pay Paul" situation, where they keep using the money from one set of preorders to fund something that should have already been in production, and that can't last forever: it's the same way Ponzi schemes work, and the reason they invariably fall apart.

Plus, they've been putting out the "this is everyone's fault but ours" vibes, which means they're not even admitting the problems they have. So while you might get your Battletoads if you preorder them, we here at OAFE cannot in good conscience recommend you give the company your money. We were going to say if you really wanted the figures, to preorder from a reputable site like Big Bad Toy Store or Entertainment Earth, but neither of them appear to be stocking the Battletoads line, which sends a message all its own.

This entry was posted in commentary, news and tagged Battletoads, Madballs. Bookmark the permalink.

3 Responses to Do not preorder the Battletoads toys