I think Apollo is mad that, as a toy collector, I worship his sister Artemis rather than him, and that's why he's cursed me with the gift of prophecy.

Casey Jones, the masked vigilante, carries a golf bag on his back filled with clubs, bats, and sticks... makeshift weapons in his war against crime.

Hey, nice, this one includes an actual bio, so we don't have to go steal the text off old trading cards anymore!

This is the exact "Ultimate Casey Jones" I jokingly predicted when reviewing the Casey Jones and Raphael (in Disguise) set earlier this year. It's mostly identical to that older figure: same Kyle Windrix sculpt, same articulation*, same Jon Wardell and Geoffrey Trapp paint, same alternate hands, same accessories by Roger Fernandez and Anthony Minichino... the same figure, in other words. But this time he's packaged by himself, and he's finally got the unmasked head.

Trevor Grove gets a sculpting 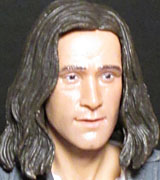 credit on the box as well as Windrix. And since we know Grove is an amazing portraitist, it seems safe to assume he's the one who did the Elias Koteas face. There was always a partial one under the old toy's mask, but this is the full thing. The likeness is great, really capturing Koteas' "why has no one ever cast him and Christopher Meloni to play brothers" looks. His hair hangs down around his face in a way that made him look like a lowlife in 1990, but would make him look like a total heartthrob just a couple years later.

He does include the masked head, 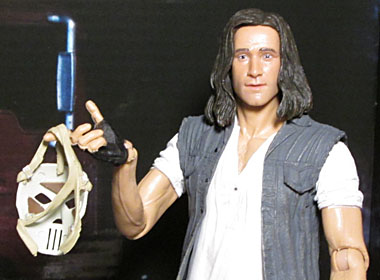 as well as all the other sports equipment, but NECA cleverly included a loose hockey mask for him - this isn't "Casey Jones going grocery shopping," this is "Casey Jones taking his mask off after a fight." There are three brick red triangles sculpted on the inside of the mask - considering NECA made a licensed prop replica a few years back, we can assume those are something from the real thing. Since they're on the forehead and cheeks, it's easy to guess they represent some padding to protect the wearer. Not something we saw in the movie, but it's cool that they're there. 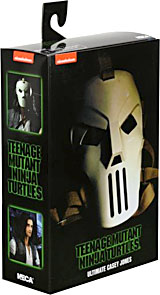 Like all the live-action TMNT movie toys, this is a Walmart exclusive. Still wish it was GameStop, of course: at GameStop, you can put down a $5 preorder and know you're going to get it; at Walmart, all you can do it keep reloading Brickseek and hope your local stores get it. Fun story: my stores never did (two of them - both about 15 miles away, in different directions - showed "6+ in stock," meaning there was a case somewhere in the back waiting for the NECA merchandiser to show up and put them out, but months went by with no change), so I ended up driving about 90 miles away to finally snag him. I don't regret that I did, because the toy's cool, but it would have been a lot better if I'd been able to get him locally.

And if I hadn't bought the Casey/Raph set before that. For sale: baby shoes, never worn.