The first two Lost Bots we reviewed from Transformers BotBots Series 3 were both hanging out on the elevator. Today's Lost Bot is on the same side of the picture, but is just being smacked around like a baseball. Despite the fact that Series 3 actually had a baseball! That just seems mean.

If the idea is that all the Lost Bots have gotten separated from other tribes, 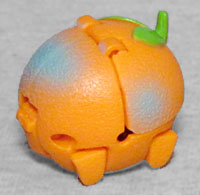 then this one is probably meant to go with the Spoiled Rottens - it's an orange, but it's covered in patches of mold. The mold is airbrushed on, to give it appropriately fuzzy edges, and is a pale blue that contrasts against the darker orange shade very nicely. In case you've ever wondered, the color is named after the fruit, not the other way around: languages develop color names in a predictable order, and "orange" is a very late addition (before it got its own name, it would simply have been thought of as a shade of yellow).

BotBots are easy to convert. For this one, the head folds out from inside a hinged panel on the top, the legs rotate down, and the tail fold out from underneath. Done!

Trisourtops is a bitter old dino dude with a stinky surfer attitude. This beach bum is way past the days when he was fresh. Now, he's always thinking of ways to make a sweet time turn sour. 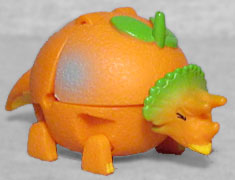 Dude thinks it's cool to go to the bathroom in the pool!

It may not be cool, but it is commonplace - remember, there's no such thing as a chemical that makes pool water change color when you pee in it. That's a lie adults tell gullible children. Not really sure how a triceratops would be a surfer, or why Hasbro's copywriters chose that to be his personality, but you have to admit that "Trisourtops" is a pretty clever name! His dino bodyparts look adorable sticking out of a big fruity orb. His front claws and beak are painted yellow, like the underside of his tail, while the neck fill is the same green as the orange's stem. 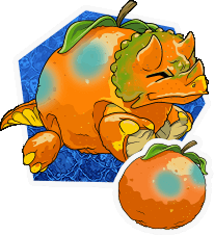 Trisourtops is available in a Playroom Posse 5-pack, a Seasons Greeters 5-pack, or a Goo Goo Groupies 8-pack.