In today's review of Trapjaw, I said his color was based on the old minicomics. For those of you who haven't held onto every piece of garbage you've acquired since childhood, we offer proof. 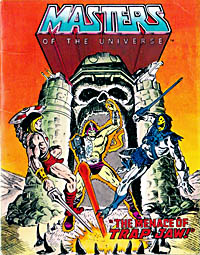 The book is called "The Menace of Trap Jaw!" and was written by Steven Grant (a fairly big name at Marvel in the '80s, he's probably best known for writing the first Punisher miniseries) and drawn by Mark Texeira, who got famous for drawing the '90s version of Ghost Rider and has been working pretty steadily since then. And I'll tell you right now, while the book is drawn in the MotU "house style," you can still see a few hints of Tex's own artistic voice coming through.

As usual, Skeletor is trying to break into Castle Greyskull. And as usual, he's failing. Brute force isn't working, so he actually uses his brain for once: apparently being aware of the multiverse theory, he uses his magic to step to a parallel dimension with the plan of walking into the space where Castle Greyskull would be, then coming back to Eternia. Really? That's his plan? That's brilliant! Why is everything else he does so incredibly stupid? Anyway, there's a ghost image of Greyskull on that other world, which as a kid always caught my fancy: I want to know more about this other world, where the technology is clearly entirely different and there's a semi-transparent castle in the middle of a field. How would that affect the people who lived there? It's a mystery that would never be answered. Anyway, while Skeletor is working, Trap Jaw comes sliding down a rope from the sky, ruining the carefully laid plans. 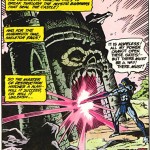 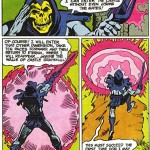 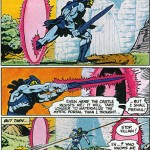 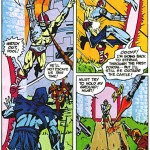 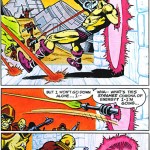 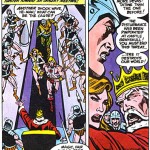 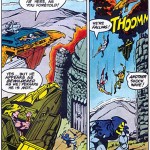 Back on Eternia, King Randor sends He-Man, Teela and Man-At-Arms out to Castle Greyskull to investigate. They find Skeletor slowly regaining his senses, and waste no time in blaming him for what's going wrong. The jawbridge opens, and out strolls our friend from the other universe. Trap Jaw then proceeds to completely kick everyone's ass. Easily. He-Man and Skeletor eventually have to team-up, joining their halves of the Power Sword to defeat the new villain. Then Skeletor kidnaps the unconscious Trap Jaw, and the heroes have a good laugh at his expense. 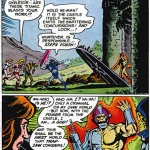 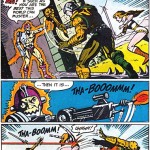 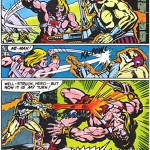 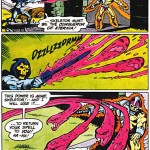 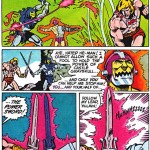 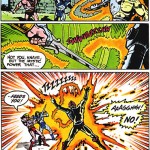 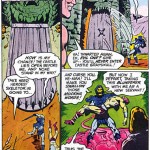 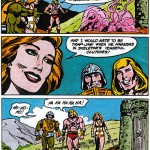 I re-read this comic dozens of times as a kid, so even though the colors aren't quite the same on the new toy, when I saw there was a green Trapjaw, I knew I had to get him...