The character known as Overtkill in today's review from Spawn Series 1 started life as a character named "Overkill," created live (on video) by Rob Liefeld and Todd McFarlane, under direction from Stan "The Man" Lee:

That's from the Comic Book Greats VHS series, which was advertised in the comics all the time back then. Listen to how he makes fun of them! 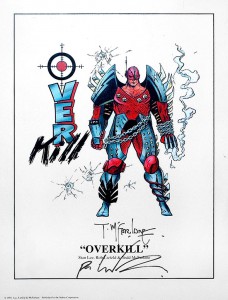 Still doesn't explain why the name had to be changed to OverTkill, though.

This entry was posted in addendums, McFarlane, videos and tagged Spawn. Bookmark the permalink.

4 Responses to The birth of Over(t)kill