This is the latest in a series (of indefinite length and regularity) of blog posts memorializing cancelled toys. Today we look back at Moore Action Collectibles' ill-fated attempt at The X-Files. 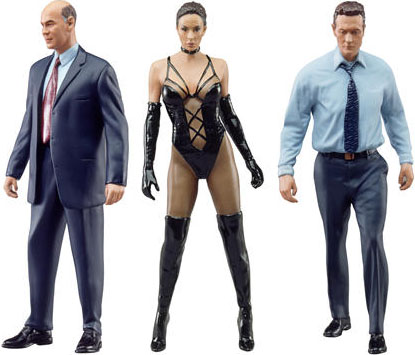 McFarlane Toys made a small assortment of X-Files figures based on the 1998 feature film, but that was all there was for quite a while.

Moore Action showed off in-progress sculpts of Skinner, Doggett and Maiterya (a.k.a. "Jade Blue Afterglow"), all done by hand, with Clayburne Moore's usual fine attention to detail. However, the television program was cancelled, and despite MAC's best efforts to push the line ahead, support just wasn't there. Shortly after OAFE was founded, on August 23, 2002, the toys were officially put to rest.

If there's a second movie, perhaps we'll get toys from it. Otherwise, we may have to wait until the 2010s, when the 20-year nostalgia cycle brings back a retro craving for this property.

This entry was posted in cancelled toys and tagged X-Files. Bookmark the permalink.