Mezco has posted new photos of Hellboy in their "Boiler Room" forum (to see them, you have to register for the forums and login).

I've been waiting for better photos of this figure. The head-on shot they've had up for weeks makes it hard to tell how good the head sculpt is - I wanted to see it from an angle, since Mignola never draws Hellboy head-on.

In a word, the figure's sculpt is fantastic - as is the entire figure. Personally, I'm very pleased. I was annoyed that Mezco decided to forego the more iconic "Hellboy with trenchcoat" for a bare-chested Hellboy in their first series, but after seeing Dave Cortes's beautiful sculpt, I can no longer complain.

I haven't anticipated a line this much since the revamped Masters of the Universe line three years ago. Cheers to Mezco for such masterful sculpting (with a tiny jeer for taking so damned long in letting us see the things and getting them to stores - I doubt we'll see these before October).

Mezco is also releasing a special translucent "Ghost of Lobster Johnson" figure as a convention exclusive: 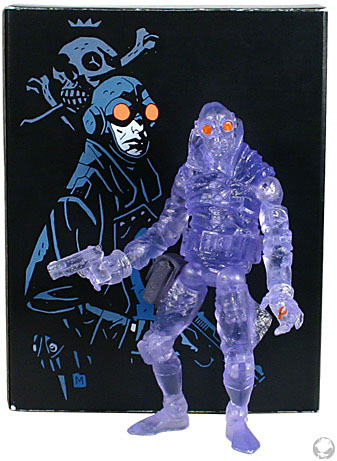 The figure (and Mezco's other convention exclusives) will be available at the San Diego Comic Con and, presumably, subsequent conventions. Mezco will also sell a limited number of the exclusives through their collectors' club.

This entry was posted in Mezco and tagged Hellboy. Bookmark the permalink.