This is the latest in a series (of indefinite length and regularity) of blog posts memorializing cancelled toys. Our figure today is Hasbro's Shaak Ti.

You may be surprised, since we just reviewed Shaak Ti back in July, so clearly she can't have been cancelled. But if you've read the review, you know there were at least two potential deaths worked on for the character in the movie. yo even made this collage of what might have been: 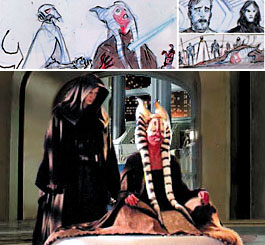 Either of those deaths were still planned to appear in the movie when Hasbro began working on their action figures, so the initial plan for the Shaak Ti toy apparently would have seen her with a hole through her chest: 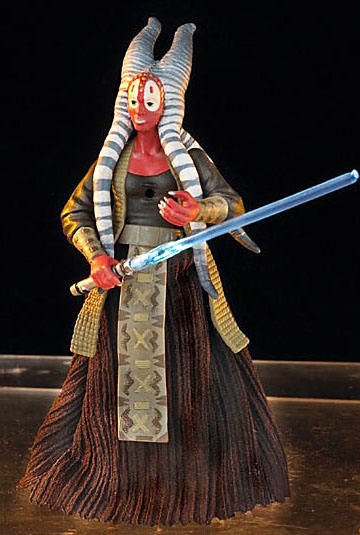 (It's right there between the two conspicuous wrinkles on her dress, which otherwise don't make any physical sense, despite remaining on the final production figure.)

It seems all the scenes were removed from the movie early enough that Hasbro had time to correct their sculpt, but it's interesting to imagine a parallel world where this is what made it to store shelves.

This entry was posted in addendums, cancelled toys, Hasbro and tagged Star Wars. Bookmark the permalink.