This is the latest in a series (of indefinite length and regularity) of blog posts memorializing cancelled toys. Our figure today is ToyBiz's 1992 Havok.

Today's review mentioned that ToyBiz was planning a Havok figure as early as X-Men Series 2, with a headshot of the character appearing on the corner of the final packaging.

You can even see where the stock photo has been spliced together
between Sabretooth and Weapon X.

At the time, ToyBiz shipped their toys in cases of 12, so having an 11-figure series is a conspicuous oddity. Obviously the idea was to have one of each character in a case, but when Havok was removed, his slot went to heavy-packing Wolverine II (because the Tiger Stripe costume had just been brought back in the comics).

No prototype for this cancelled Havok has ever surfaced, but things were far enough along in production that the packaging art had been completed, giving us not only a glimpse of what appeared on shelves in some alternate reality, but also revealing what kind of toy it would be: 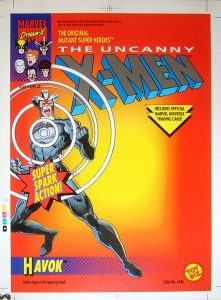 That "Super Spark Action" the card boasts is the same feature the Magneto in the same series had: ie, push a lever on the toy's back, sparks shoot out a hole in the chest. An interesting way of suggesting Havok's powers, to be sure, but duplicating an action feature repeated elsewhere in the same assortment (on a more recognizable, more important character, nonetheless) probably helped seal Havok's fate. ToyBiz would make an X-Factor Havok in 1995, but it took until 1998 for the classic costume to get a toy (as a ToyFare exclusive).

This entry was posted in addendums, cancelled toys, ToyBiz and tagged X-Men. Bookmark the permalink.