In today's Quicksilver review, yo said that Magneto wasn't originally Quicksilver and the Scarlet Witch's dad. So who was?

Their original folks were Miss America and the Whizzer, a pair of WWII Marvel heroes (who had a much more logical connection with the kids than Magneto). That was even the "real" answer, until someone decided they wanted to shoehorn Magneto in, instead. Suddenly there was this whole convoluted thing involving two women giving birth on the same remote mountain at the same time, both having twins, and one woman's babies being passed off as the other's... it's terribly clunky, and really just smacks of a need to fill space more than advance a good story. "I have 22 pages to fill, but only 17 pages worth of story. What to do? I know, I'll screw up a perfectly fine family dynamic!" And yet, for some reason, it's stuck. Go figure.

Now, the first time we saw Magneto without his helmet (in Uncanny X-Men #62), he did resemble Pietro. Somewhat. But then just a few years later, in 1971's Amazing Adventures #9, he was shown in prison, nearly naked and with wavy brown hair: 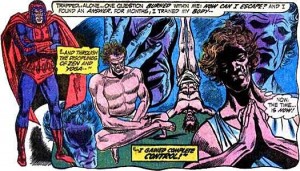 Obviously that artist did not think Magneto was Quicksilver's dad, proving that it was not yet set in stone, and wouldn't even come up for a few more years.

This entry was posted in addendums, comics and tagged Avengers, Marvel Legends, X-Men. Bookmark the permalink.