Now that Hasbro has announced some upcoming TFAC two-packs, I thought I'd post a couple particular issues that I really want to see figures from. 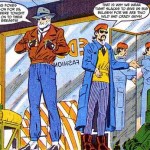 My absolute first choice would be Marvel's GI Joe #55, from January of '87. Why that one? Because through a long and convoluted series of events, we actually get to see Cobra Commander and Destro unmasked for the first time. Don't believe me? Click the image over there on the left.

How about that! Okay, sure, they immediately don disguises, but the fact remains that those are two versions of the characters that we've never had. And though we're supposed to believe the Commander's ponytail and Fu Manchu mustache were just part of his disguise, we then spend several weeks (of story time - it actually comprised six months of comics, until issue #61) following him in his civvies, and he always looks the same. You're telling me he never took off the "fake" hairpieces, even when he was alone with his son? Yeah, right. That's what Cobra Commander actually looks like under his mask.

Of course, Destro doesn't actually look like Sean Connery under his steel mask - that definitely is just a disguise, even though he kept it on all the way back to Scotland. How can we tell? Because they do show his naked face in the comics, a few years later. I'm not sure of the particular issue, but it's somewhere in the '90s, I believe. In one storyarc, we get to see both Destro and even Snake-Eyes without their masks on. And that would make for a second cool comic pack, wouldn't it? Just re-use the existing TFAC bodies, and mold new heads.

I have to admit, I came up with the idea of "Destro, Snake-Eyes and Cobra Commander unmasked" as figures back when Hasbro was still doing three-packs, but it can still work now that they're dropping down to just two. What do you think? Would you buy these masked men if you had the opportunity to see them au natural?

This entry was posted in addendums and tagged Cobra Commander, GI Joe. Bookmark the permalink.