I've never given out Halloween candy before. Never really cared. But since the wife wanted to this year, we did. That's the way it works. That didn't mean we had to be conventional, though. Yeah, we had one bowl full of candy, but here's what was in the other bowl: 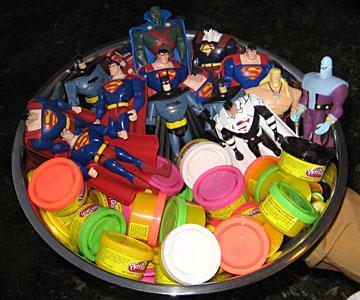 The JLU figures were all duplicates: Mattel has such stupid figure sets that you're bound to get multiples at some point, and it's not like they'd sell for anything. So why not give them away free? You wouldn't believe how excited kids were to get a toy along with their candy.

Bats was the most popular, but all of the JLU toys were gone in the first hour. That's when I went back inside and grabbed a bunch of extra Hasbro Heroes. You know, Galactic Heroes, Superhero Squad, Robot Heroes... those. Heroes-scale toys.

So the next time you complain about having to buy duplicates of something you already have, remember: you too can be the coolest house on the block next Halloween...

This entry was posted in announcements and tagged Batman, Superman. Bookmark the permalink.

2 Responses to Trick or treat!