In today's review of the GI Joe Plague Troopers vs. Steel Brigade set, you learned that one of the figures, Red Zone, was based on a real-life fan. Luke Ellison entered a contest in FHM magazine (yes, I know the "M" stands for "magazine," I just don't care), and won the chance to be scaled down and become a Real American Hero. Here's the winning entry: 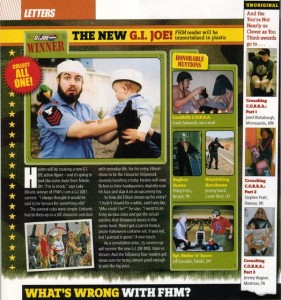 Hasbro will be creating a new GI Joe action figure - and it's going to look like some dude from Toledo, OH. "Oh, I'm in shock," says Luke Ellison, winner of FHM's I am a GI Joe! contest. "I always thought it would be cool to be famous for something odd."

The contest rules were simple: entrants had to dress up as a Joe character and deal with everyday life. For his entry, Ellison chose to be the character Shipwreck, clumsily handling a baby. Hasbro will now fly him to their headquarters, digitally scan his face and slap it on an upcoming toy.

So how did Ellison dream up his entry? "I hadn't shaved for a while, and I was like, 'who could I be?'" he says. "I went to an Army surplus store and got the actual patches that Shipwreck wears in the comicbook. Then I got a parrot from a pirate Halloween costume set. It was red, but I painted it green." A nice touch.

Blah blah blah, etc. Pretty cool, huh? For more information (straight from the source, no less), you can check out this interview with Ellison on Toy Bender.

This entry was posted in addendums and tagged GI Joe. Bookmark the permalink.