It's Old Toys Month, so let's take a look at another unreleased Xevoz figure. This time it's the Reptosaur Mech Shell. 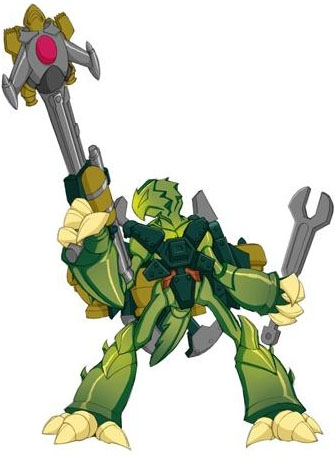 First spotted in the Stikfas HQ tour, Mech Shell is a little turtle guy, with add-on armor to create his namesake carapace. Yes, that thing's not biological, it's heavy-duty protection! He would have had articulated thumbs, just like Firedrake, and a snapping jaw on at least one of his heads.

Looking at the showroom photo, his arsenal of accessories would have included two big knives, a bazooka, small double-barreled cannons, a big wrench, several bombs and missiles, an oil can, and more. His joke piece was a key that would fit into his back like a wind-up toy, and he had a little jetpack-wearing turtle sidekick/drone that he would have been able to fire from his rocket launcher. Plus, the shell itself would have had little turbines, to help him maneuver while underwater (unless those were supposed to make him fly?). Look at all those goodies: 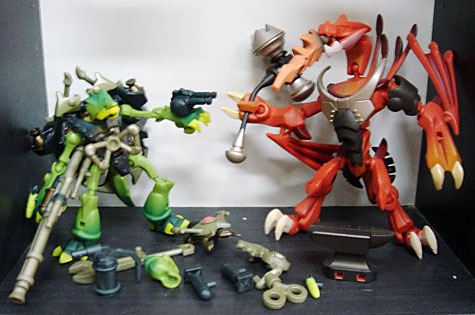 This would have been an absolutely amazing set! If you'll excuse me, me and my glass cutter are taking a trip to Singapore.