OAFE in ToyFare (sort of)

Shortly after our founding in 2002, I sent an email to ToyFare magazine, answering a question they asked in their "FanFare" letters column (they wondered about what body was beneath Anya's bunny suit - if you also wonder, the answer is in that review). That letter never saw print, and after all, who can blame them: they're not about to give free publicity to a website that was, at most, two months old - we might have been dead by the time the letter saw print.

Anyway, in this month's ToyFare #163, we finally appear on the letters page! 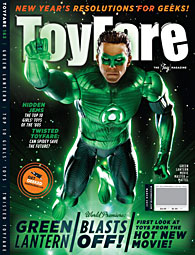 No, they didn't finally find our mail at the bottom of some huge backlog of unanswered messages, though it would be funny to imagine it so. Rather, it's just a random one-line blurb.

See, ToyFare is on Twitter, and to promote that fact, every month they run a few random Tweets they've received. This month, we're one of those random lucky folks: 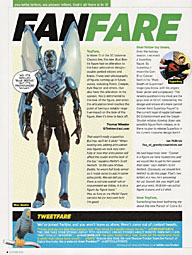 Want some context for that out-of-context Tweet? Okay! ToyFare asked:

"In our newest issue, we destroyed a Tron: Legacy figure. Do you guys want to see more demolished toys? Because we have a bunch! Sound off!"

To which we replied:

Yes, we've really been wondering about that since May 22, 2003. Some mysteries are eternal...

This entry was posted in announcements, Marvel, random, ToyBiz and tagged Thor, ToyFare. Bookmark the permalink.