Mezco Toyz will be introducing even more characters from the DC Universe including world-famous super heroes such as Batman, Superman and the Green Lantern. Look for many more characters to hit the store shelves this year!

The first series of 2 packs includes the following pairings: 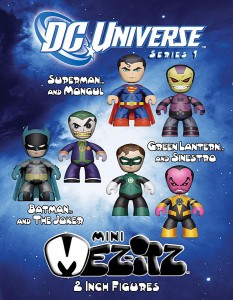 Mini Mez-Itz are 2" collectibles that are cool by design. All Mini Mez-Itz feature five points of articulation and are packaged together on a blister card!

Available for pre-order from finer retailers or at http://www.mezcotoyz.com/store/detail.aspx?ID=924

This entry was posted in ATFC, DC, Mezco and tagged Mez-Itz. Bookmark the permalink.