We've got a Toy Fair press release for you, today:

Ridgewood, NJ February 5th, 2011: Shocker Toys is pleased to announce that we will be attending the International Toy Fair 2011 in New York from February 13th to the 16th at the Jacob Javits Convention Center. Booth 4947 will be packed with prototypes from our Indie Spotlight series which rips characters from the pages of independent comicbooks and celebrates them in a superposeable 6" action figure format. New Mallow vinyl figures will be on hand as well, taking licensed characters and delivering them on stylized, poseable bodies unlike anything you've seen before. Mallows also come in a blank format, ready to be painted by the artist in your home. We will also be announcing exciting new licenses for action figures and Mallows this year!

**SPECIAL GUEST! Shocker Toys welcomes DMC (of Run DMC) to Booth 4947 Sunday, February 13th at 10am. DMC will greet the press and introduce them to his new action figure and comicbook.

For further info, please visit http://www.shockertoys.com/. We will be posting updates on our Toy Fair announcements there for those who may not be attending this year.

But wait, that's not all! Who wants to see an upcoming figure?

We managed to get a shipment of The Tick and Mucus Tick action figures out of China before their New Years celebration, so those are in stock now. Visit http://www.shockertoys.com/store.php to be the first person to get one! We also wanted to give you a sneak preview of our action figure lineup for the big show, so here's an early look at the unforgettable comic hero, MADMAN! 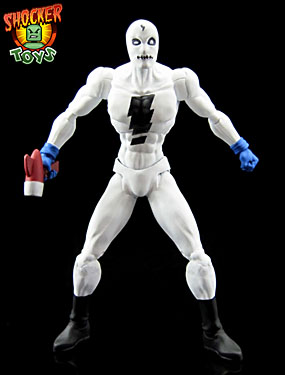 Madman will come in an Indie Spotlight 2 pack with Captain Action.

This entry was posted in ATFC, Shocker. Bookmark the permalink.