In today's review of TNA Legends of the Ring Sting, we mentioned that he started out in a tag team. Here's a picture from back then: 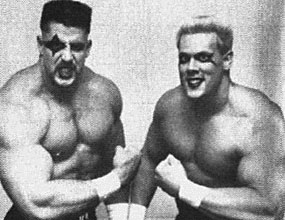 You'll notice they're both wearing face paint. And in the review, we said that was something both men kept doing even after going their separate ways: Sting, obviously, is known for his various designs over the years, but this Justice guy? His real name was Jim Hellwig - he's better known as The Ultimate Warrior.

This entry was posted in addendums, Jakks and tagged wrestling. Bookmark the permalink.