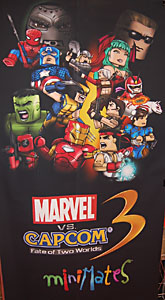 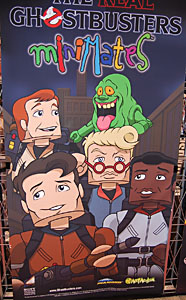 Full fledged viewing of Marvel-vs-Capcom Minimates and Munsters, the reveal of the Marvel Select Red Skull, tons of Marvel Minimates and barely any Star Trek - it must be the Diamond Select Booth!

All of the Marvel Select figures looks far better in person than I expected and will probably be buying them all. I especially enjoy the "build a base" concept with the movie figures and Gambit's charged-up cards came out super, super cool.

The Munsters figures look incredible, so excited about those! I did ask if they would do 3¾" figures to go with the upcoming Dragula, but no dice - license doesn't cover that scale. Good forethought, guys. Universal Select Dracula does look much better in person, but still... not only is not Lugosi, its far more stylized/cartoony than the rest of the line... it'll be interesting to see how that does for them...

The Real Ghostbusters Minimates are just too awesome, and they show a surprising but obvious revelation - cartoons translate exceptionally well into Minimate style! Here's hoping for more! Also, the GBs will have their  jumpsuits painted on their torsos, similar to the SDCC GB2 boxset! I love when they do stuff like that!

The Pirate Minimates should be out mid-April. Wave 2 of the vehicles are a MAX A.P.C., the Pirate Ship, and the BttF II Delorean. Once again, Toys R Us will get the "normal versions" and specialty market will get repaints. Sadly, the ship will just be minimally repainted, i was hoping for different coloring as with series 1's MAX jet a la The Flying Dutchman in the PotC films. Even sadder is that the Delorean will be "frosted" again, just like it never appeared in the film.

On a final note, I apologize on behalf of DST for the poor quality of these photos. They use cylindrical plastic cases which are impossible to not get glare from and they're scratched up to high heaven. I know money is tight, DST, but you really need new cases.

This entry was posted in C2E2, DST and tagged Back to the Future, C2E2 2011, Captain America, Ghostbusters, Marvel Select, Minimates. Bookmark the permalink.