So yesterday, NECA quietly revealed that they'll be making a Robocop figure: 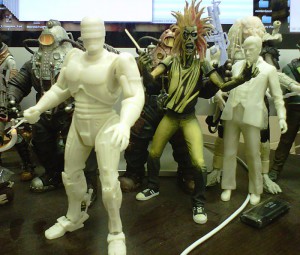 Now, we've already had a really quite good Robocop figure in the Movie Maniacs line, but NECA has a reputation for upping the quality of figures that McFarlane made in the past. Usually, though, there's a lot of room for improvement, and in this case, that's just not true. So here's a wishlist of things I want to see with NECA's Robocop toy:

Now, I'm not delusional. I know most of these things are pipe dreams. But that's the point: they're dreams, they're wishes, they're what I'd ask in a world with no limitations or realities of production. They're the things that would make me buy Robocop straightaway and nominate him for ToY. Will I buy him even without the gun and the helmet? Maybe - it depends on how much better than the McFarlane version it is...

5 Responses to NECA's making Robocop - now here's what I want.